Well after some conversations and research I decided to put the first coat of the Master Series product down.  This is a silver/aluminum paint that seals in the rust, seals out moisture, and is touted in the VW community.  I decided to paint now (even though I'm not ready for the ENTIRE pan to be painted) because I want to avoid any surface rust issues.  I put a lot of time and effort getting it sand blasted, hate to see it go to waste.

I used a roller and foam brushes to put it on.  I missed some areas here and there, the color of the paint was identical to the metal!  But that's why they recommend two coats, right?! 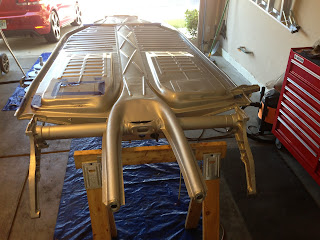 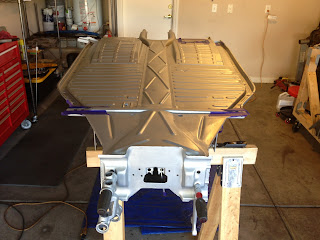 I left the areas I plan on cutting out without paint so I don't have to sand down areas...I just painted.  Depending on how quickly I get all the other work done, I will probably have to scuff the layer of paint I laid down today.  Which is a pain, but it's better than raw metal getting any sort of surface rust on it.  There were some brush strokes as I put the material on, but they seem to have disappeared for the most part. The sanding will help with that too.

I also took the time to paint with Master Series all the suspension components and everything that attaches to the pan.  This stuff is supposed to work wonders and I don't want to have to do it again for another 54 years...so I figured it can't hurt! 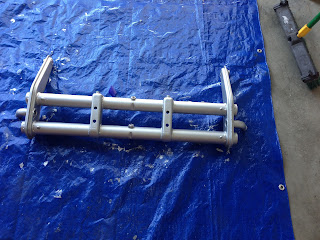 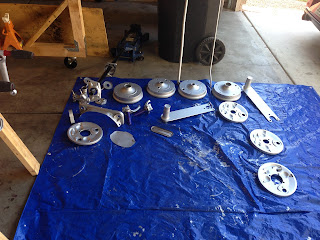 Once the metal is repaired, I have a high gloss black that will go over everything, just like the factory.

I still have to coat the top of the pan and some random odds and ends.  I ordered the Napoleon Hat and bottom plate from the previous post.  Also working on getting a used pan half.  I think that update will be a fun one ;)
Scribbled in by Ryan around 5:31 PM