Well I had yet another two trips to SoCal and was able to get some things sorted.

First, I went and returned 3 of my white walls to get some that had a wider white.  Now they are all within about 1/8" of each other so I'm much happier.  Just need to get the wheels painted!

Then yesterday I was able to meet up with a super cool dude who had a very nice 61 ragtop but he restored himself over the course of 5 years.  Crazy thing was....he was 21!  Very impressive as he did a great job, took pride in his work, and had a great head on his shoulders.

He had original bumpers on his car that were in almost perfect chrome.  They have a couple nicks and issues that need work, so I will likely get them rechromed but they are ORIGINAL GERMAN!!!  It is very hard to find these, in such good shape, and even at a reasonable price.  Thanks Tyler!

Truth is, I could probably run them as is.  But with the rest of the car being all redone I would feel a bit silly.  We'll see when it comes down to crunch time.

Anyway, this has been an expensive week with the tires, Wolfsburg West parts run, and the bumpers.  I have my steering wheel restoration to pay for and also the small chrome pieces.  So I'm looking at another hefty credit card bill.  Time to pick up some extra work!

I am working on some smaller projects too.  I got my original windshield logo made into a vinyl stencil which I am picking up today.  Should be able to etch glass using it.  I am also going to have one made for the reproduction vent windows.  And finally I'm also working on a battery sticker for the original style battery I bought at Wolfsburg West.  It's a Bosch logo and looks like this. 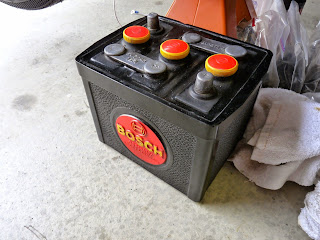 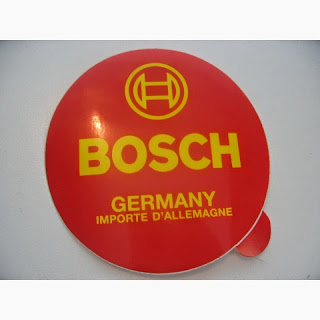 Always something fun going on!
Scribbled in by Ryan around 10:05 AM