After using the engine for as long as possible in early February of 2005 it finally met its fate.  It had been giving me signals of its problems with slight overheating issues, the oil pressure idiot light in the speedometer...It was most likely fixable for around $500 or so but I figured that if I was going to spend that much I might as well spring for a new engine that is reliable and can be driven on the highway. 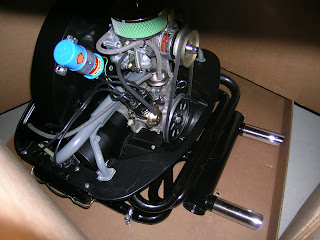 I originally started my search on www.thesamba.com for not only classifieds ads but engine builders that were highly recommended as well as reasonably price.  My search ended when I found Steven Houston and Serrano in Torrance, California.  After a huge amount of emails, I called Steve once and the deal was finalized.  I was told they were behind by 1 to 2 weeks which I didn't mind.  He has great feedback on TheSamba and I have yet to hear anything bad about him.  My timing was impeccable as some issues regarding Steve underselling the competition made the wait time for my engine quadruple as his business boomed!  He couldn't have paid for that kind of advertisement!  Overall my experience with Steve was great and I would recommend him in a heart beat.  He was very nice about it, never got snappy with me even after I sent him emails every couple of days checking up on my engine.  After two months, I received my engine and began the process of installing it.

As far as advice for buying a new engine, I recommend researching as much as possible.  In my case I was looking for reliability and cost more than power.  I just needed to be able to travel 300 miles every couple months cruise at highway speeds.  I also looked here locally for engines as well as building it myself but Steve was the best solution for my problem at the time.

While the engine was out I also decided to replace the transmission mounts, throw-out bearing, axle boots, main shaft seal, do a transaxle oil change, and do a general cleaning.  My rear main seal had blown on the way over from Boynton Beach where I bought the car and oil was slowly leaking out into the transaxle making my clutch slip under hard acceleration (yes I know...36hp don't pull that hard...but you know what I mean).

With the help of my dad, Muirs Idiot Book, Haynes, and TheSamba we were able to pull the engine in an hour or so.  The other maintenance issues took a while.  I also neglected to order some parts for the engine which were simple but needed. 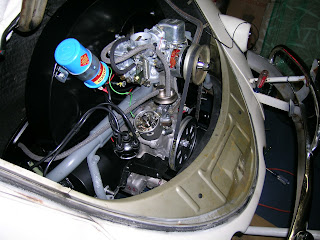