One of the biggest problems in my bug is the lack of audio.  Granted the engine has a nice hum to it that can really be soothing, but at the same time it can become a little monotonous.  So I began my search for a small audio solution that would not interfere with my stock bug.  I wanted to keep the bug 6v so a 12v amp was out of the question.  I found a low voltage amplifier that seemed to work.  It was a kit from www.qkits.com and here is what I did to implement the solution.

Depending on your situation the kit will have different instructions.  So I'm not going to get into how to put the actual amp together, just what I did to install it.  My amp was a 1w low voltage amplifier.  It actually only puts out about 325mW at 6v.  This may seem very minimal, but as I found from listening to it in the bug, it is plenty and works stellar.  Once I put it together I put it in a project box which contains the amp and cut a small hole to let the wires come through.  I mounted the amp on the turn signal support bracket with a zip tie.  My whole point being throughout this project to keep everything removable so that I don't ruin the originality of the car. 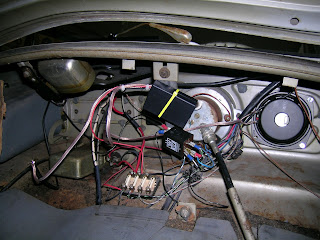 For my speaker I chose the Fostex FE107E which is a 4" shielded speaker rated at 15w with great audio characteristics.  Since my amp was mono and there was only one stock location for a speaker in the bug I chose a full range speaker.  The 4" speaker mounting holes were a little too small for the stock speaker location so I ended up using washers to extend the mounting points a little farther back letting the machine screws turn in at a slight angle.  This also helped to make sure that the speaker had enough room to flex.

I ran a mini stereo headphone jack to the glove box where I could store the iPod and could input the audio.  For output I just ran another set of speaker wire to the speaker.  For power, I ran one to a grounding point and the other to a switched source.  In my car the turn signal fuse was a very easy to access solution that worked perfectly.  Since the turn signals only work when the key is in the on position, that would mean the amp would only be on when the key was in the on position.

So after hooking up the wires, mounting the speaker, and testing it I was left with a great way to hear audio in the bug.  Granted this is not an awarding winning sound system here, but I would think it would be comparable to the stock AM radio, if not better.  It is portable, safe, and a great way to keep the car stock in case I or a future owner decides to take it out and still have the same originality.