Well, it's been a couple months+ since I've worked on the car.  Between some busy schedules, cooler weather, and a bit of funk regarding the reproduction vinyl situation...it's been a while!

I did get the engine from Michigan and brought it back while working a trip from Detroit.  The whole crew wanted to know what I had in the big bag.  I had to explain it to some pretty shocked faces.

Today it was about 60*, sunny, with a bit of wind and an overall nice day.  I spent about 4 hours in the garage doing some wet sanding.

First I did the underside of the hood which had a few drips from some heavy handed painting.  This was actually my worst run of the entire paint job.  I reduced the fan setting to be more of a circle and didn't turn the flow down.  It was a short burst but put a bunch of material on the hood too fast.  And I got to sand it off ;)

The picture below shows a technique I found on the internet.  Using permanent marker on brand new paint doesn't sound like a great idea but it acts like a guide coat to show the low spots and help with color sanding.  Once the marker is gone, you've sanded enough!  The picture shows the area to the right already started and the area to the left without any sanding.  Quite a big run.

Then, I flipped it over and started working on the hood.  I am trying to my darndest to not get any sand-thru spots on this hood.  I've taped all the edges and high areas.  I made my way around the perimeter with 1500 grit and will tackle the middle portions next.  Then to 2000, 3000, and the polishing.
Slowly but surely.

And at least I don't have to color sand this! 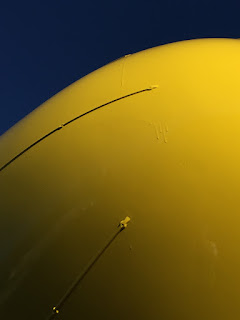 Scribbled in by Ryan around 4:35 PM No comments: