When I first got the car, I never really took the time to find out any additional information about the original owner.  The story I got from the previous owner was, I guess, good enough.

Well, that sort of changed.  And by chance.

I wanted to get the brand of my accessory tachometer that I installed several years ago. SO, I dug out my receipts and found the company and sent them an email.  While I was looking, I stumbled on the original paperwork that came with the car from the dealer in West Palm Beach. I had this stuff before, just never took the time to do much research into the original owner. 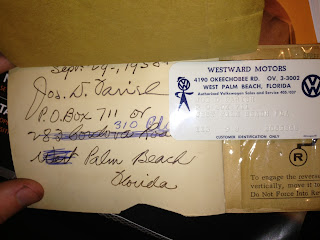 I googled the name on the paperwork I had and found out the guy was a prominent lawyer in West Palm Beach.  In fact, he was worth a lot of money too.  I continued to search and found out he had one daughter listed in his obituary.  Well, after some more sleuthing I found her on Facebook and sent her a message at 130am.  This is what I sent her.

After a fairly exhaustive search, I've stumbled upon your Facebook. Before you delete this message, let me explain!

My name is Ryan and if my research is to be correct I may own your father/mother's old 1959 VW Bug. I have paperwork which shows that your dad bought my bug in September of 1958 in West Palm Beach. It was then registered to who I think is your mother, Louise and bodes well with the story I heard from the previous owner I bought the car from. "She loved her VW and even though her husband owned a car dealership, she wanted to keep it!"

I did some research on your father and mother and saw that I have missed the opportunity to share stories with them. I bought the car in 2004 which is a real shame as I should have done more research then to be able to speak with your father about this great little car I have. From what google says, he sure seemed like a remarkable man. I even found an NPR article about his dog tags being found in NYC 66 years after he lost them.

I'm in the process of restoring it now. I'm keeping it purely original. It was originally a sparkly green which is what color it will be going back to. I want the car to appear as it did in September 1958 and will go above and beyond to restore it that way.

I'd love the opportunity to talk to you and see what you know about the car and help me learn about your mom and dad. I understand this is a little strange, but this car has a story to tell and I'm all ears. Please feel free to call or email me at any time. If you want to do some research on me, feel free. I truly look forward to hearing what you have to say!

Come to find out, she wasn't the daughter of the original owner...the original owner was her grandmother whose name was Louise!  With a little family history I soon learned that she was not the only child of the man listed on the paperwork.  There were two more granddaughters, one who learned to drive on my Bug and was with her grandparents (the original owners) when they bought it!  Her name is Debe (DB) and we've been in touch since!

It turns out, her grandfather's name was the same as her father's name which explains the paperwork and google search confusion.  She also confirmed the story from Part 1.  The story gets even better when she says that her son was supposed to get the car when he turned old enough but things worked out differently.  The weird part is, her son is a pilot too!

She is looking for pictures of the car and I promised to include her in the restoration updates.  After all that, there is no better name for my Bug (which I never named until now), than Louise.  :)