Well I had (am still having) a full day today.

I flew early in the morning and then dropped off my remaining parts at the media blaster.  Fenders, doors, hood, rear seat and decklid.  Should be done in a few days and that expensive part of the project will be finished! 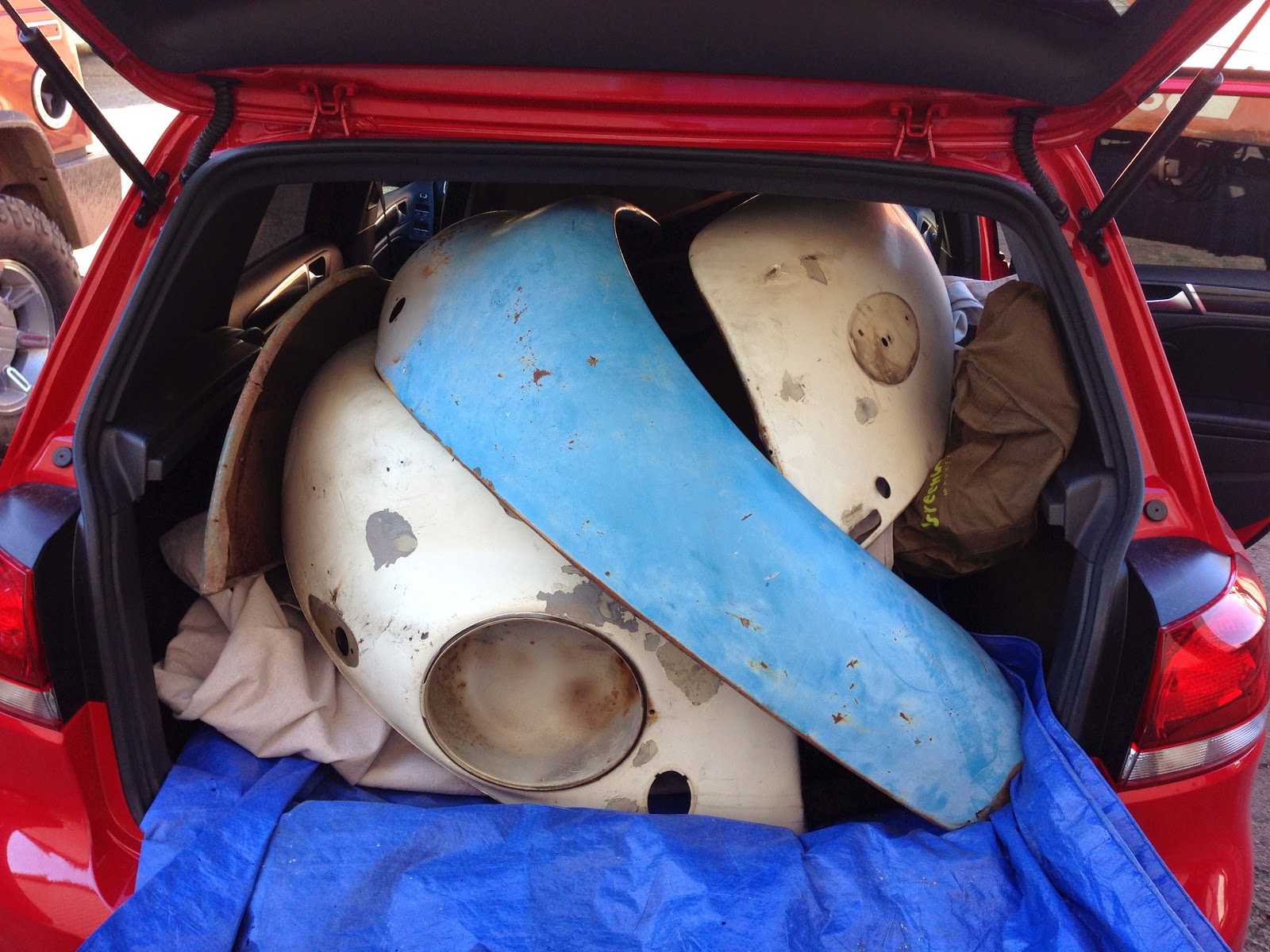 Caroline had a trip into North Vegas today so we got some unexpected but nice hang out time.  Always  a fun surprise when she shows up.  Sometimes we coordinate ever so dilligently all for not, so it's nice when it works!

I did get to de-rusting my purchased hood replacement.  I sent my original hood to media blast just to see if it will be salvageable.  I can also sell it for some $$. 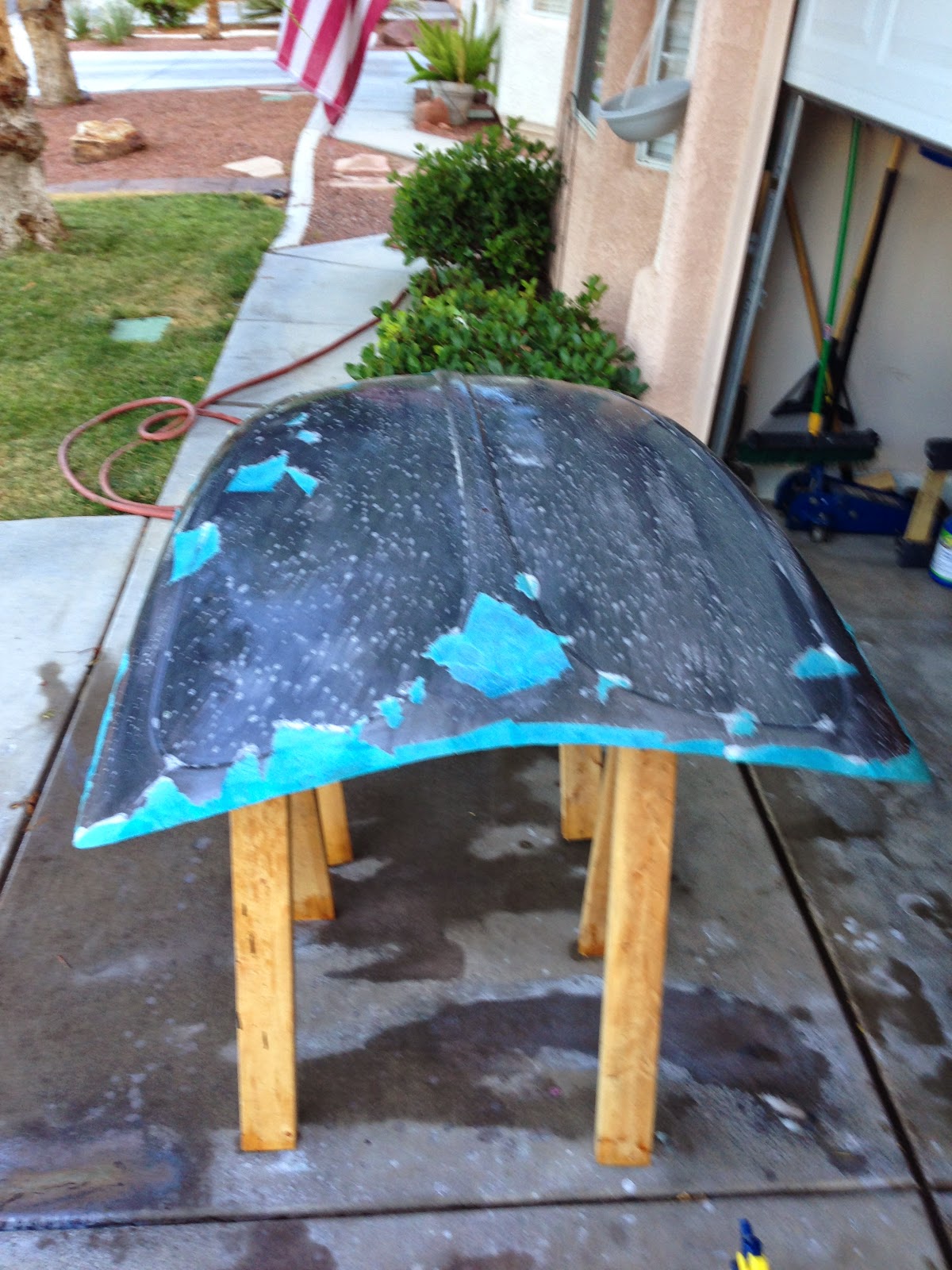 My purchased hood had been blasted a while ago and sitting in the house had higher humidity, even in the desert so it did rust a bit.  The hood does need some work too, especially around the nose area.  But nothing that is not manageable.

I used phosphoric acid which converts the rust (iron oxide) to iron phosphate.  It is no longer rust, inert, and you cant paint on it.  If I didn't do this, the rust would probably rear it's ugly head again in the future which would be a little upsetting. 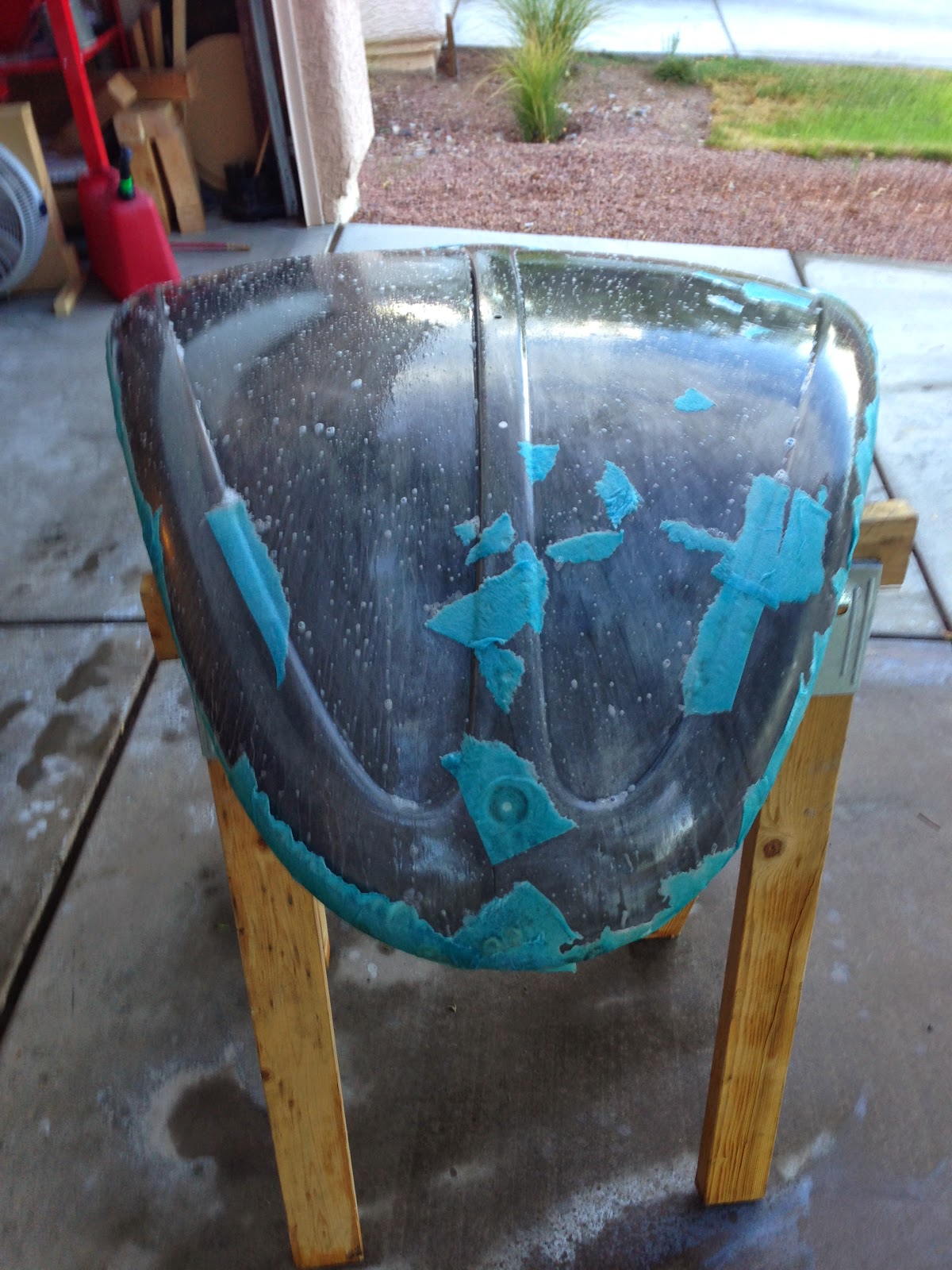 I could have sent it back to media blast but this is definitely a project that a few hours and some elbow grease can achieve with similar results.

The blue towels were wetted, then put in place to keep the phosphoric acid on the tougher spots longer.  It is still sitting outside now, I'll let it sit for a couple hours and then before bed put it in the garage and wet it down one more time with the acid to dry overnight.

Tomorrow I'll clean it off and should be good to go!

Paint should be this weekend.
Scribbled in by Ryan around 7:28 PM No comments:

Well, the past few days I have been getting ready for my final primer day.  I have a bunch of small pieces that needed to be blasted and primed.  I spent about 7 hours Saturday doing most of the small pieces.  Then another 6 or so today working on the gas tank and one seat frame. 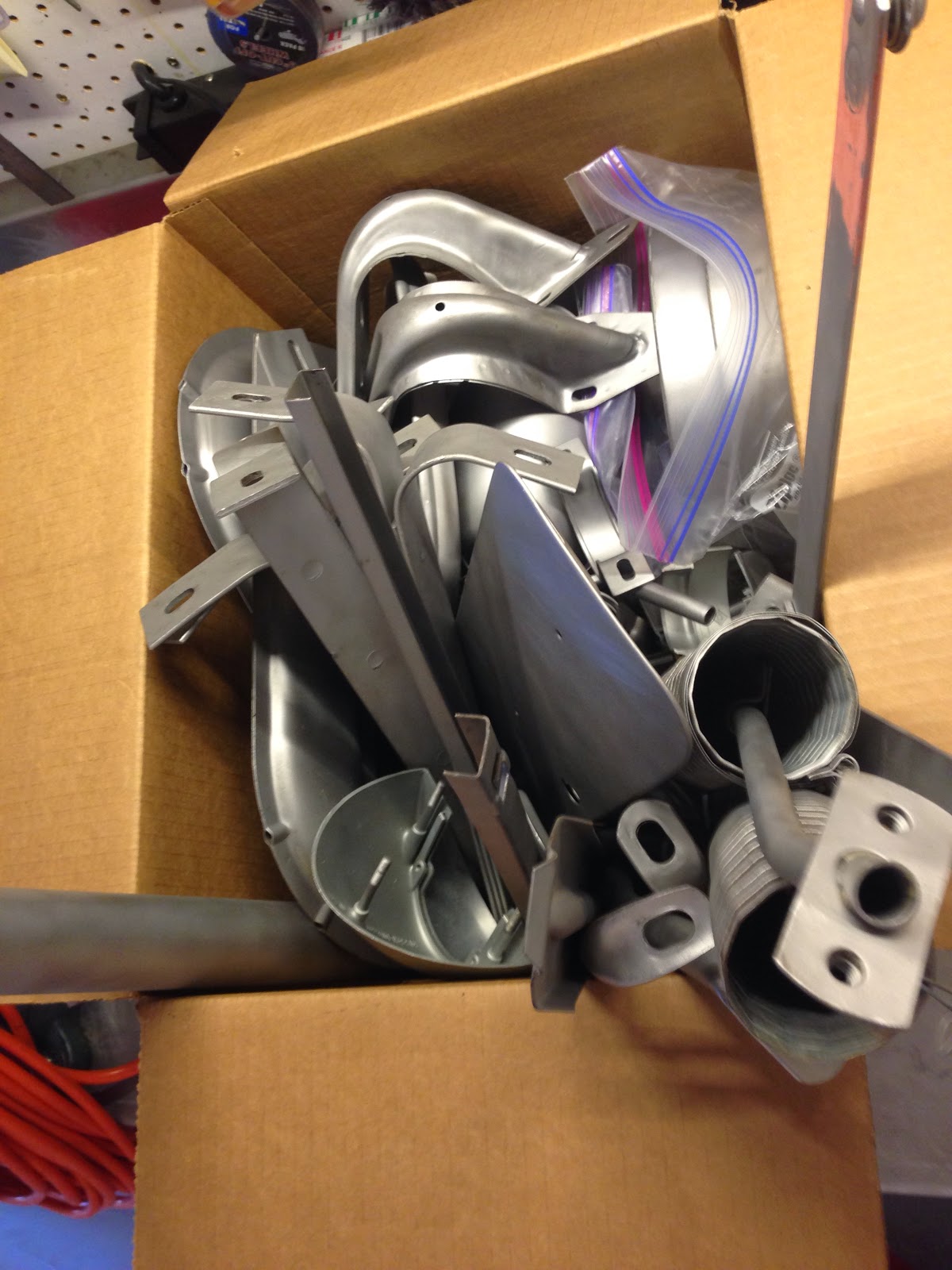 The paint on some of the pieces was VERY thick and hard to get off.  I'm also using a semi-abrasive media so it takes a bit longer sometimes but doesn't damage the underlying material. 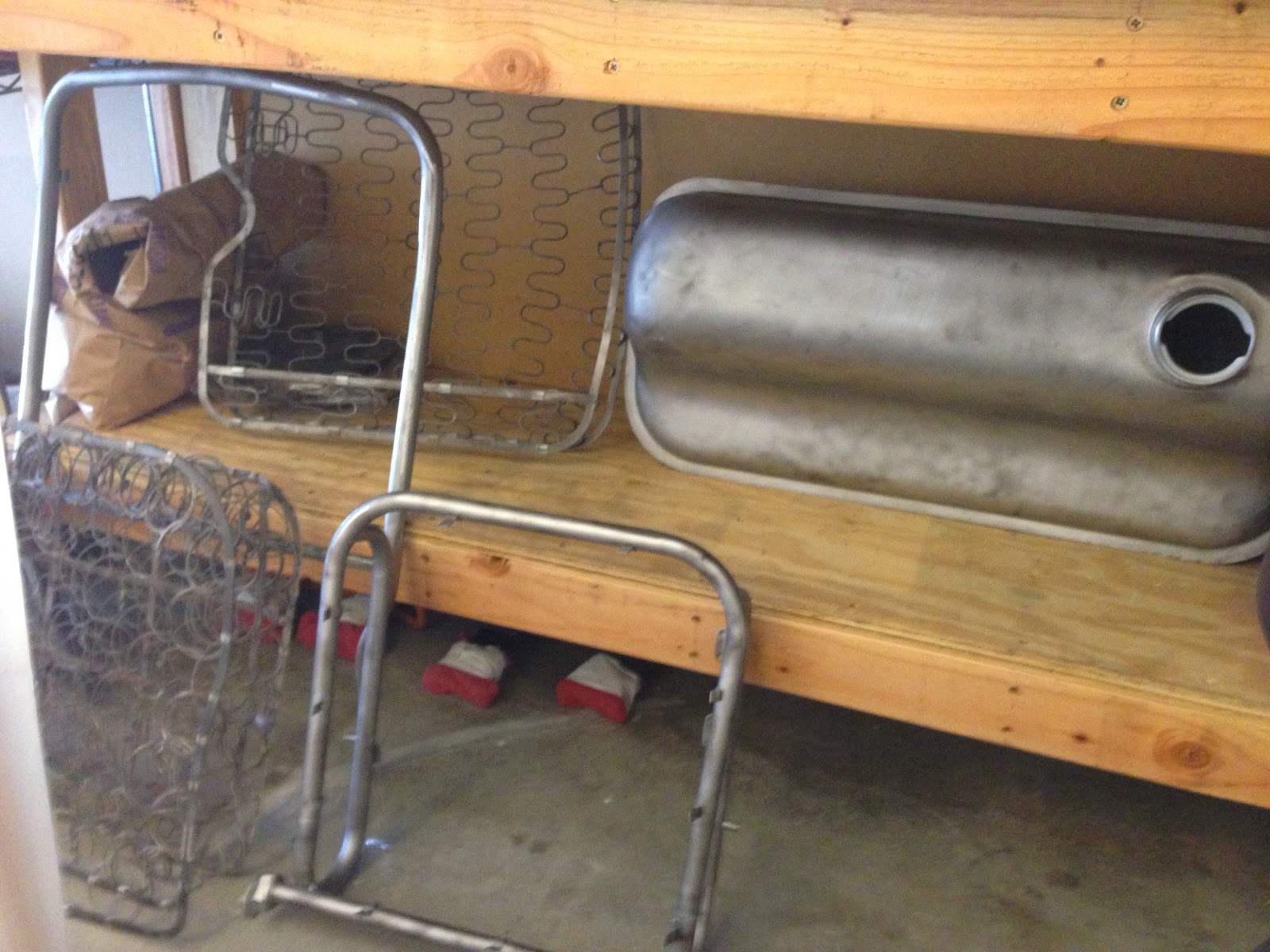 I have the shift rod, emergency brake handle, and driver's seat still to go.  Those will wait until the last application of the primer (during high build stage when all body work is done) before I take them off the pan and paint them.  That way I can still move the pan around and not have to worry about an immobile pan!

I also installed some eye hooks into the ceiling so I can run some wire to hang the pieces I am going to paint. 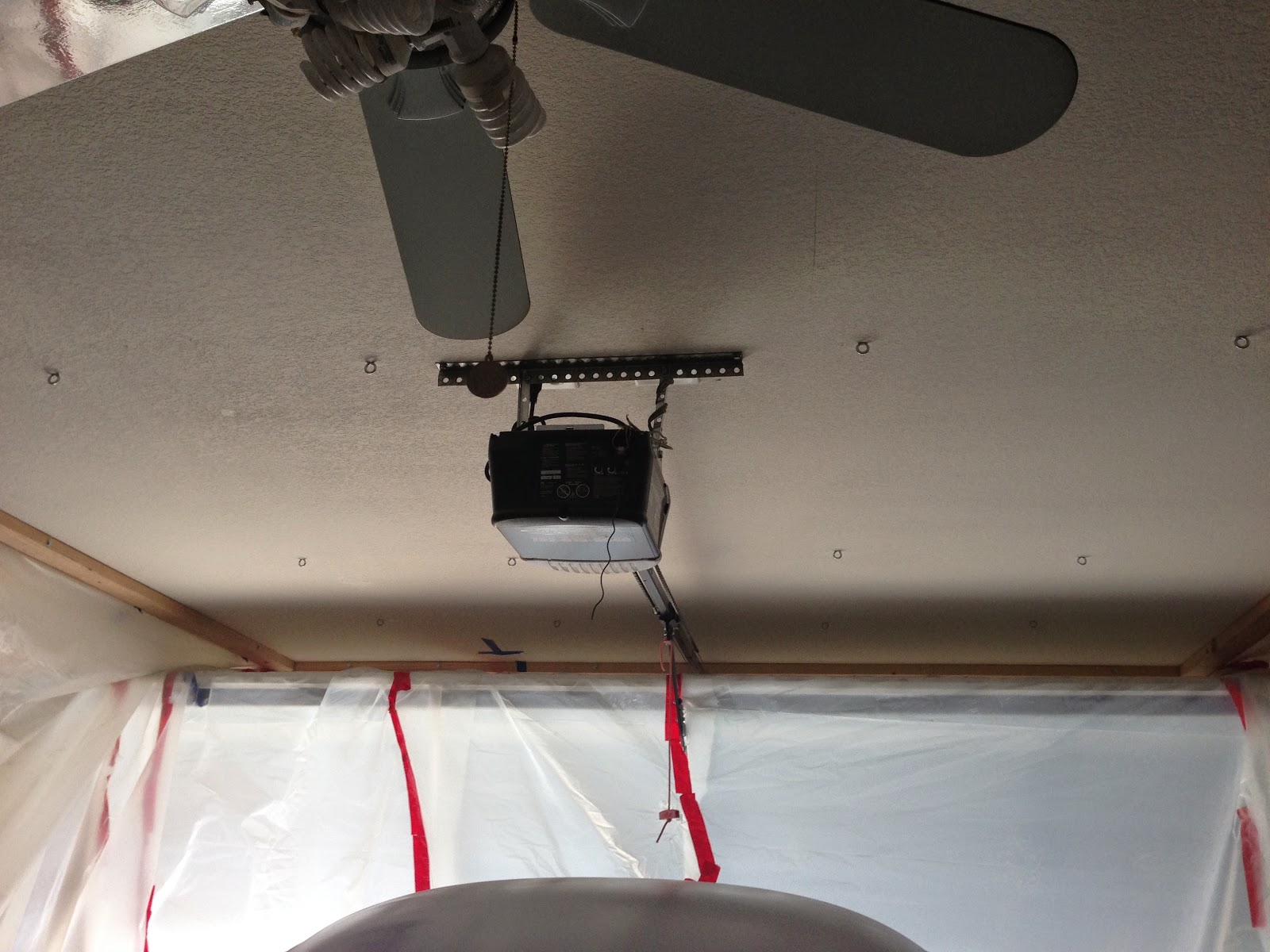 Last of the "big parts" off to the blaster tomorrow, hopefully done Thursday and paint this weekend.  Digging into savings at this point in order to move onto the next step.  Blah.

Looking forward to wrapping up the primer and moving onto metal and then body work!
Scribbled in by Ryan around 8:18 PM No comments:

Today was the big painting day!

I went to bed last night with a lot on my mind, having never painted before and trying to get it done before the hot Vegas summer heat made it more difficult.

One thing that was really bothering me was the plastic side walls were peeling up their tape because of so much suction from the fans.  I went to bed not knowing how to fix the problem and woke up in the middle of the night with a eureka moment!

The reason the sides were being sucked in, pulling up the tape which held them in place on the floor was because there wasn't enough air getting into the booth.  Solution: more filters on the back side to let more air in.

I also switched from a more thorough, less porous filter to a (cheaper) filter that allows more air flow.  By adding 4 more filters and changing the type, the plastic side walls were no longer peeling up their tape. 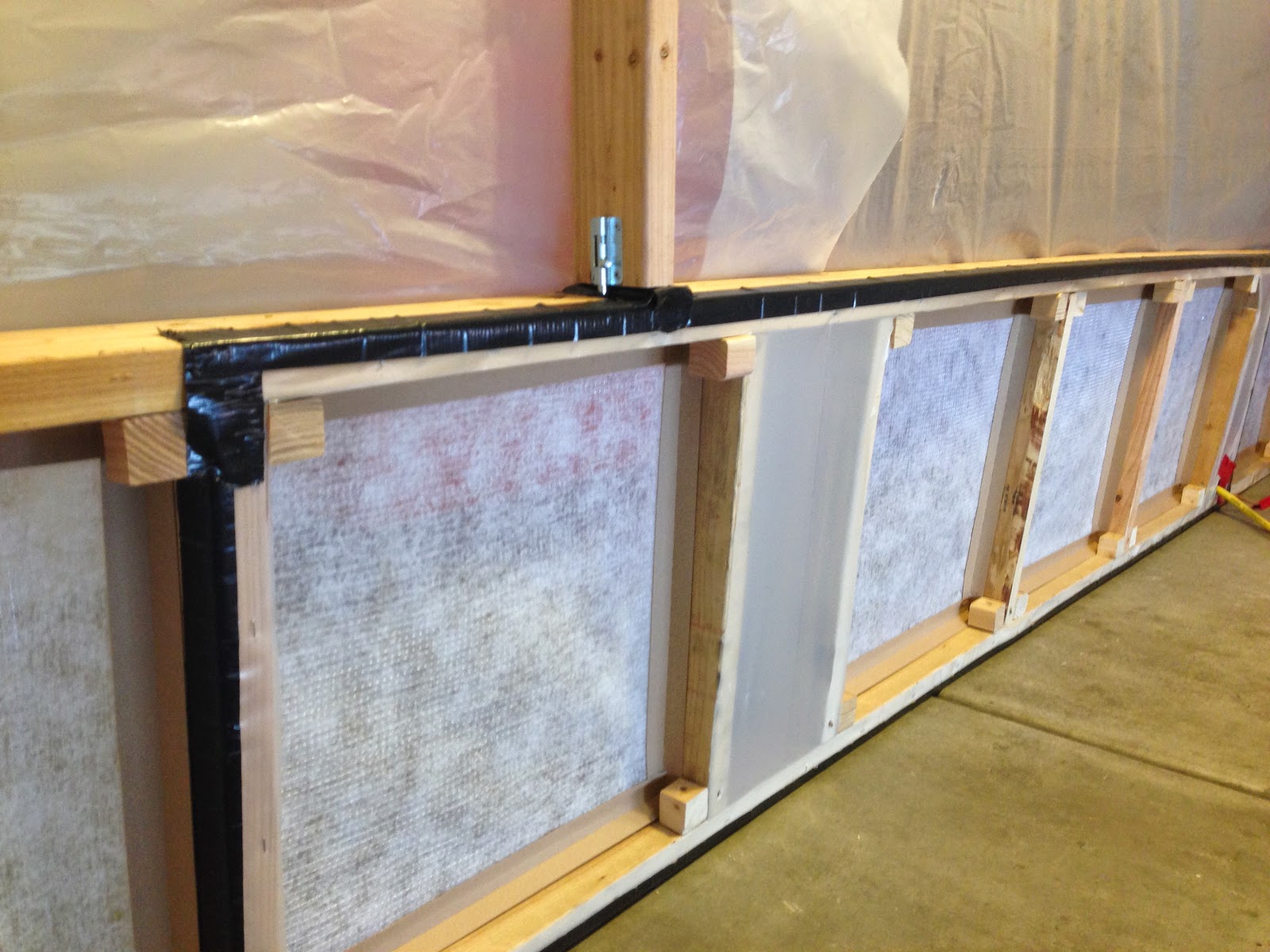 After that, I proceeded to clean off the car with wax and grease remover.  I went around twice using two rolls of paper shop towels (lower lint) to get all the remaining grime off the car.  As expected, most areas were pretty clean while others required a bit of attention.

I then organized all my materials, put on my paint suit and protective gear and then started mixing paint. 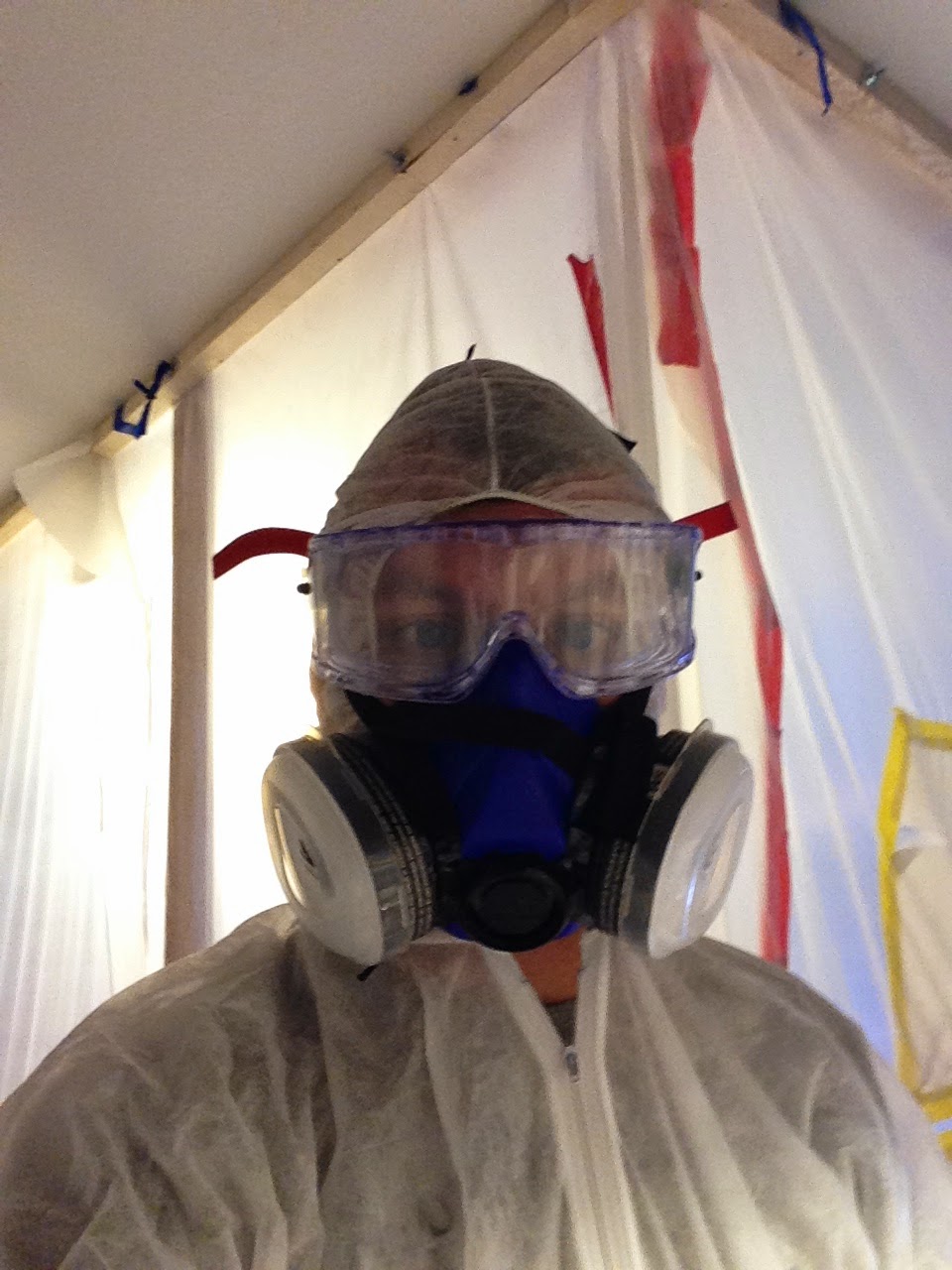 All went smoothly, although I decided to use a smaller cup which meant I had to stop 3 times to refill.  In all I used about 64oz of paint which gives me another two coats available.  I plan to use the rest when I do my primer surfacer which will fill in the semi-low spots and prepare the surface for final paint.

The end result was pretty good.  I still need to work on proper technique.  Had some dry spots in some places and some runs in others.  Overall not bad for a first try. 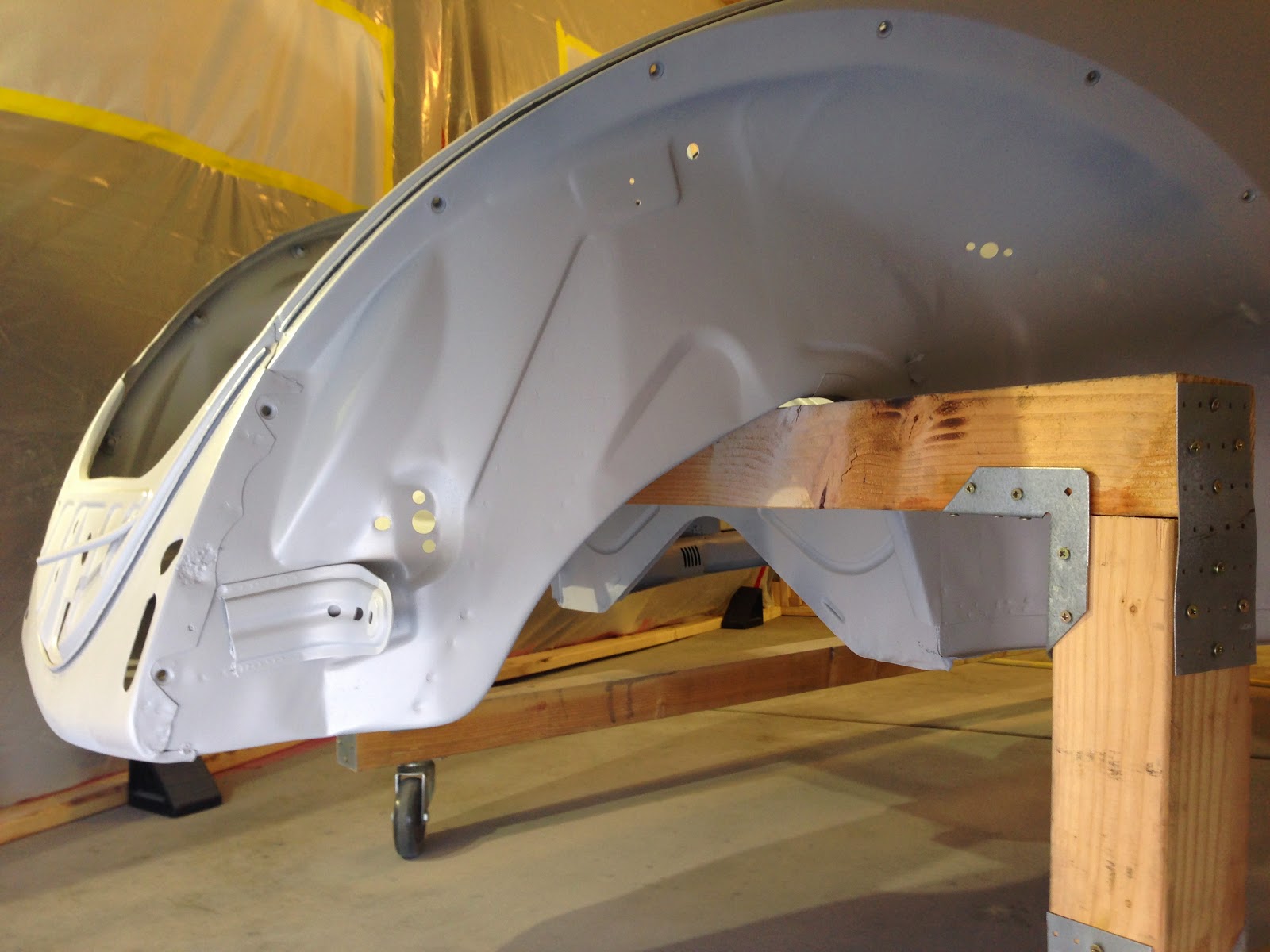 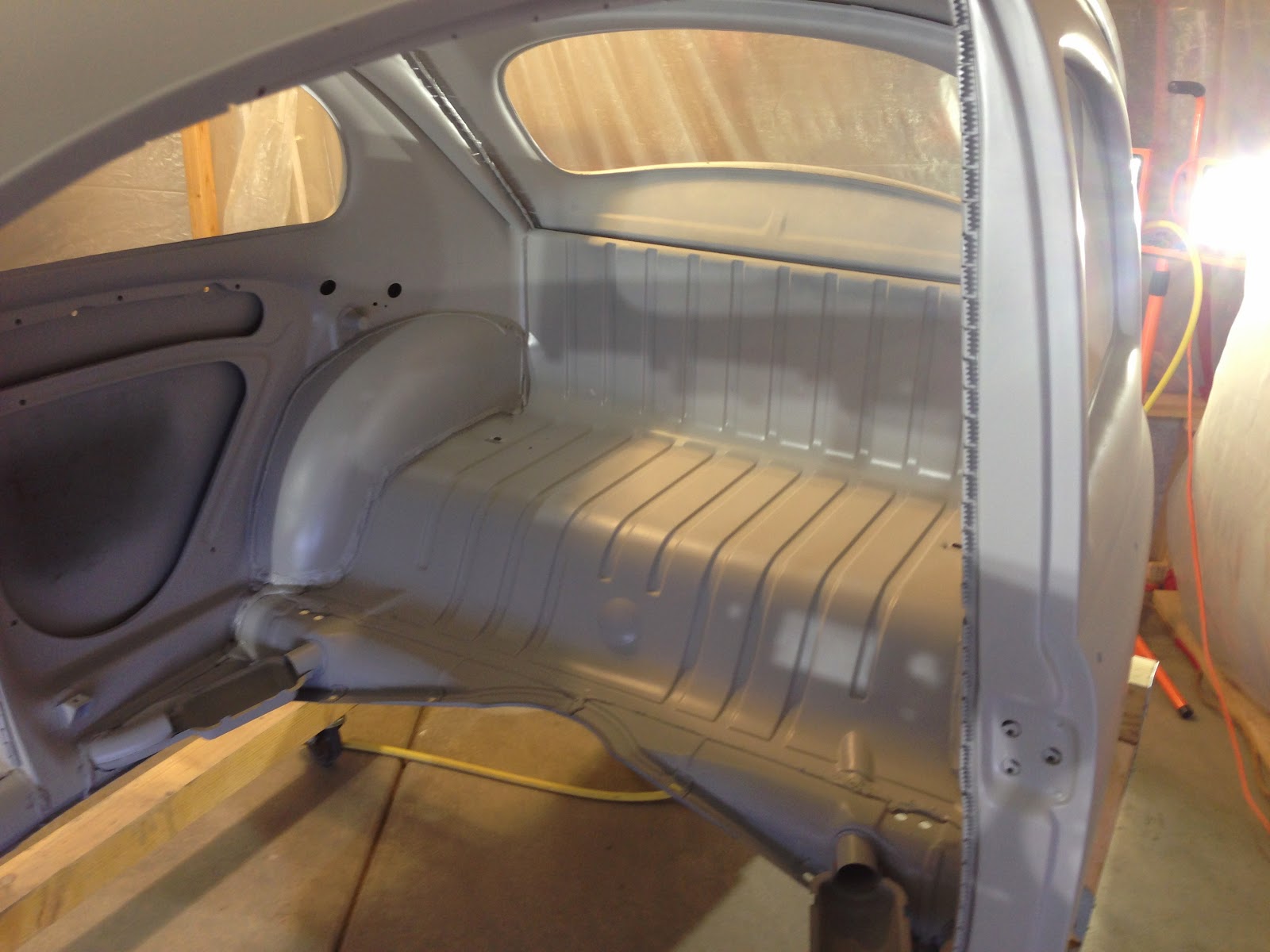 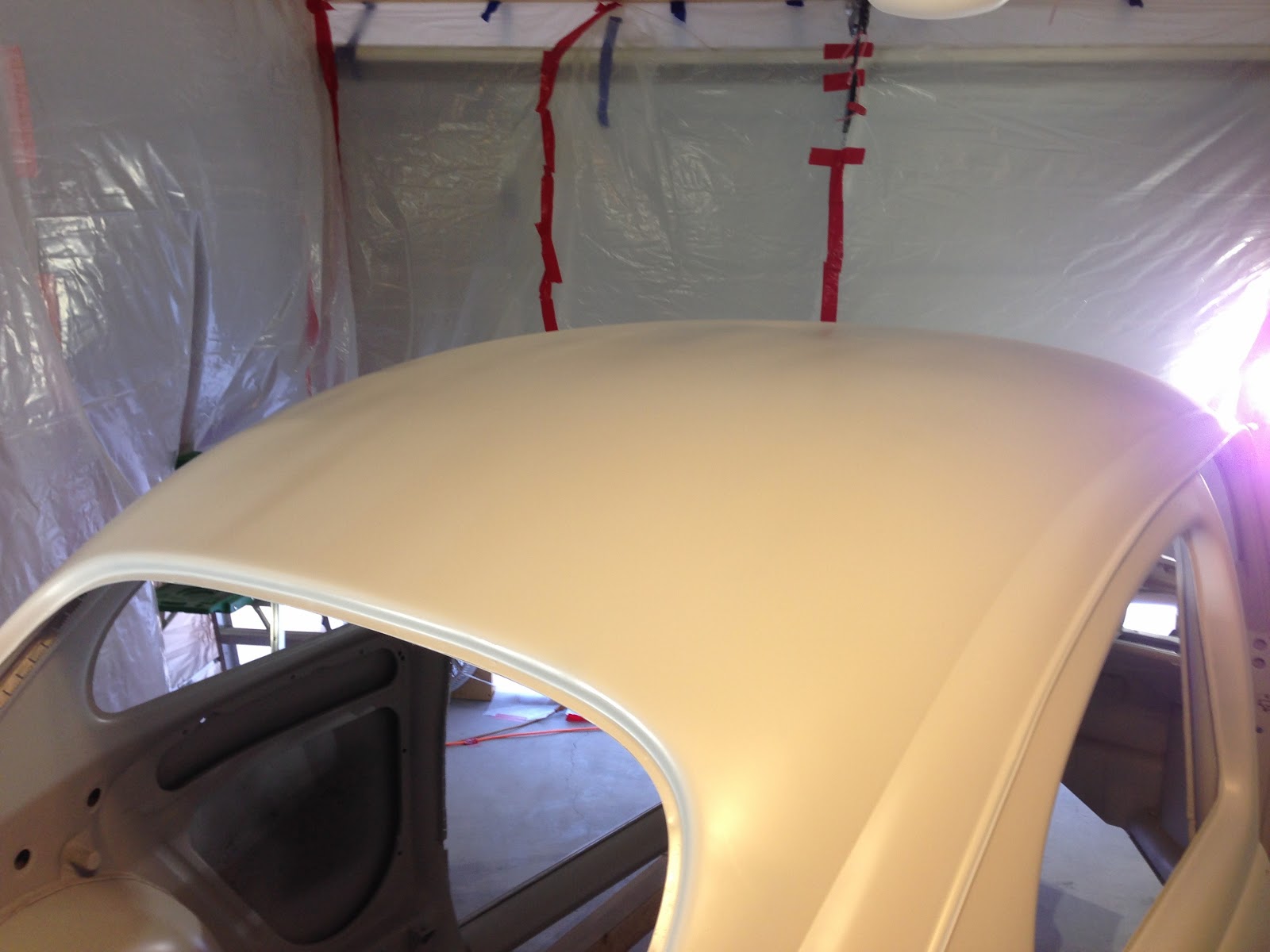 I still need to get all the odds and ends blasted and primed.  I am going to partially take down my paint booth so I can roll the bug pan in there.  Waiting on positive cash flow to continue...at a standstill for now!

Scribbled in by Ryan around 3:32 PM No comments:

Well, a much needed update and actual progress on the car itself.  It feels good to be back into the swing of things.  I am, however, in a huge cash crunch after this recent part of the project.  Yikes!

While the car was at the blaster, I took the opportunity to start my paint booth.  All I had to do was drop the plastic and tape it up!  (It took a bit longer than just that, but you know...) 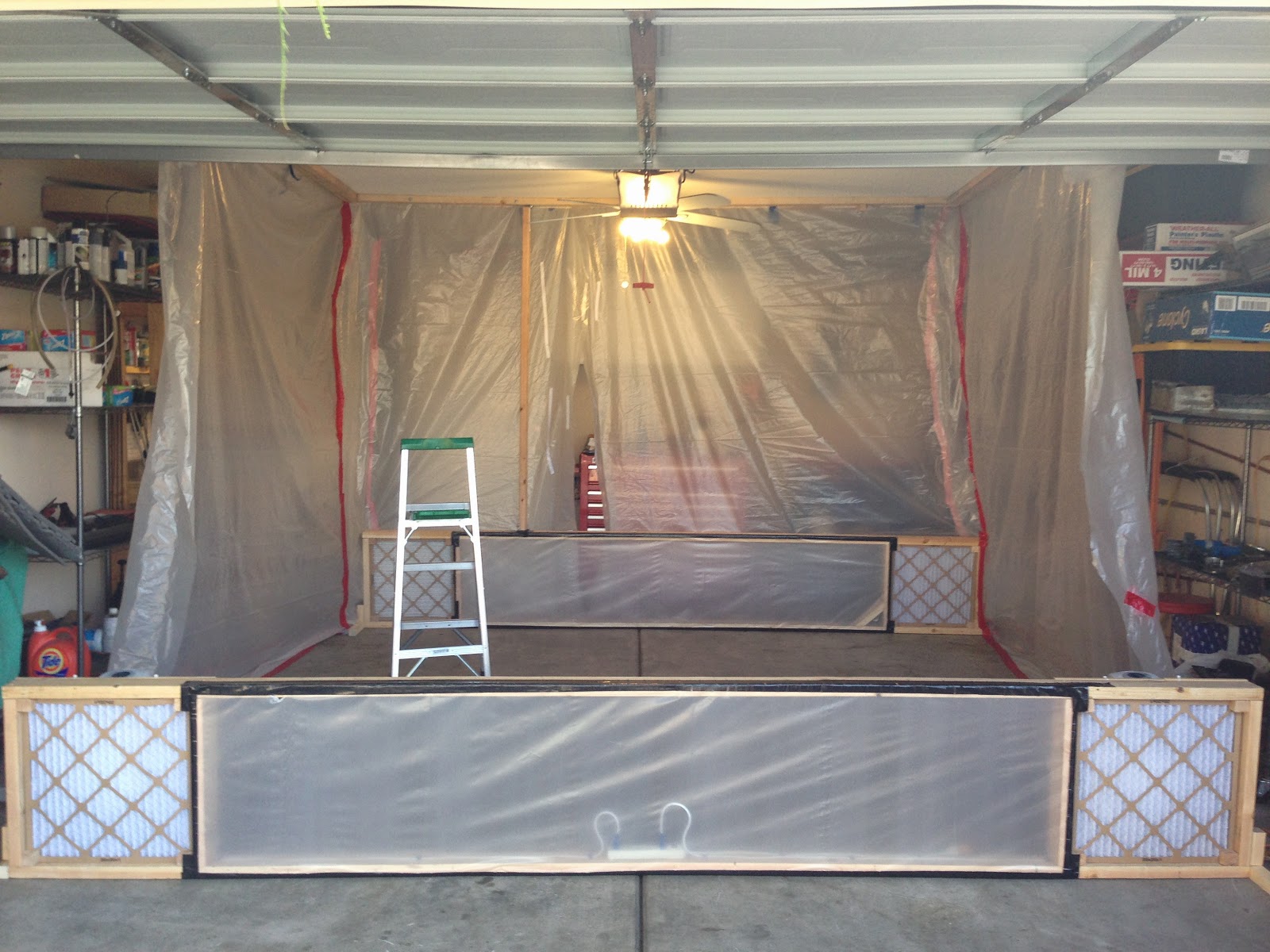 Back from the blaster, all naked! 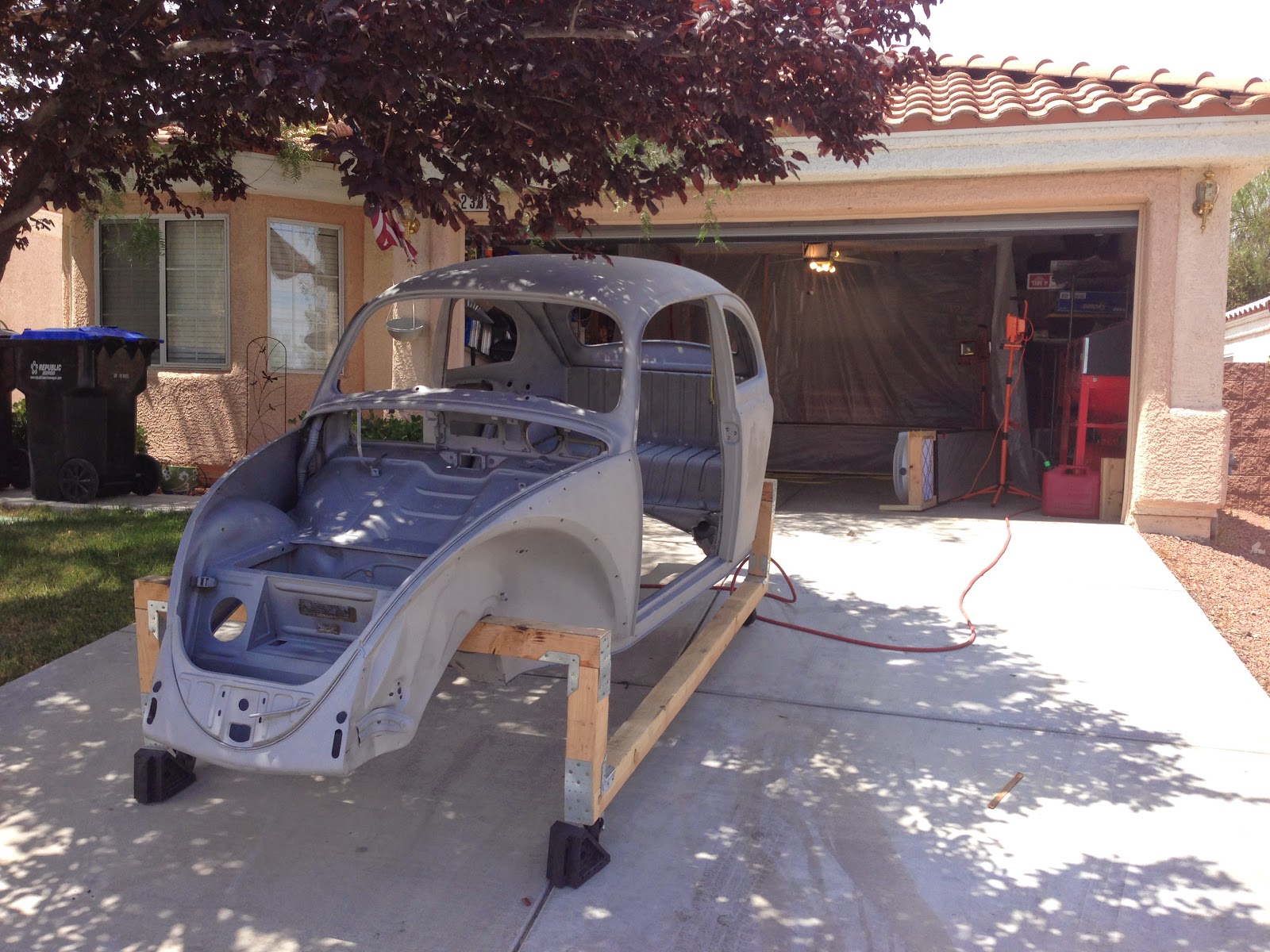 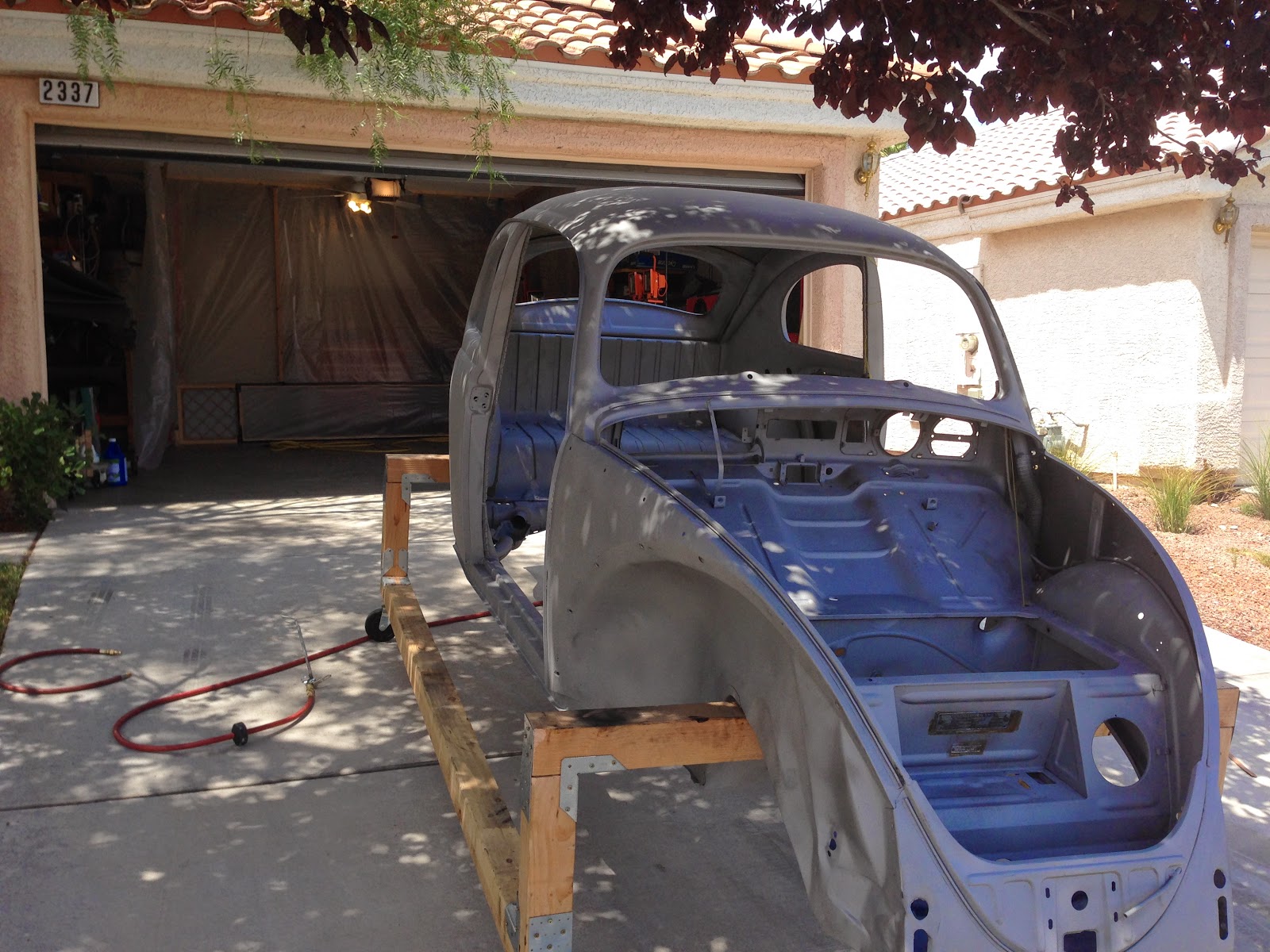 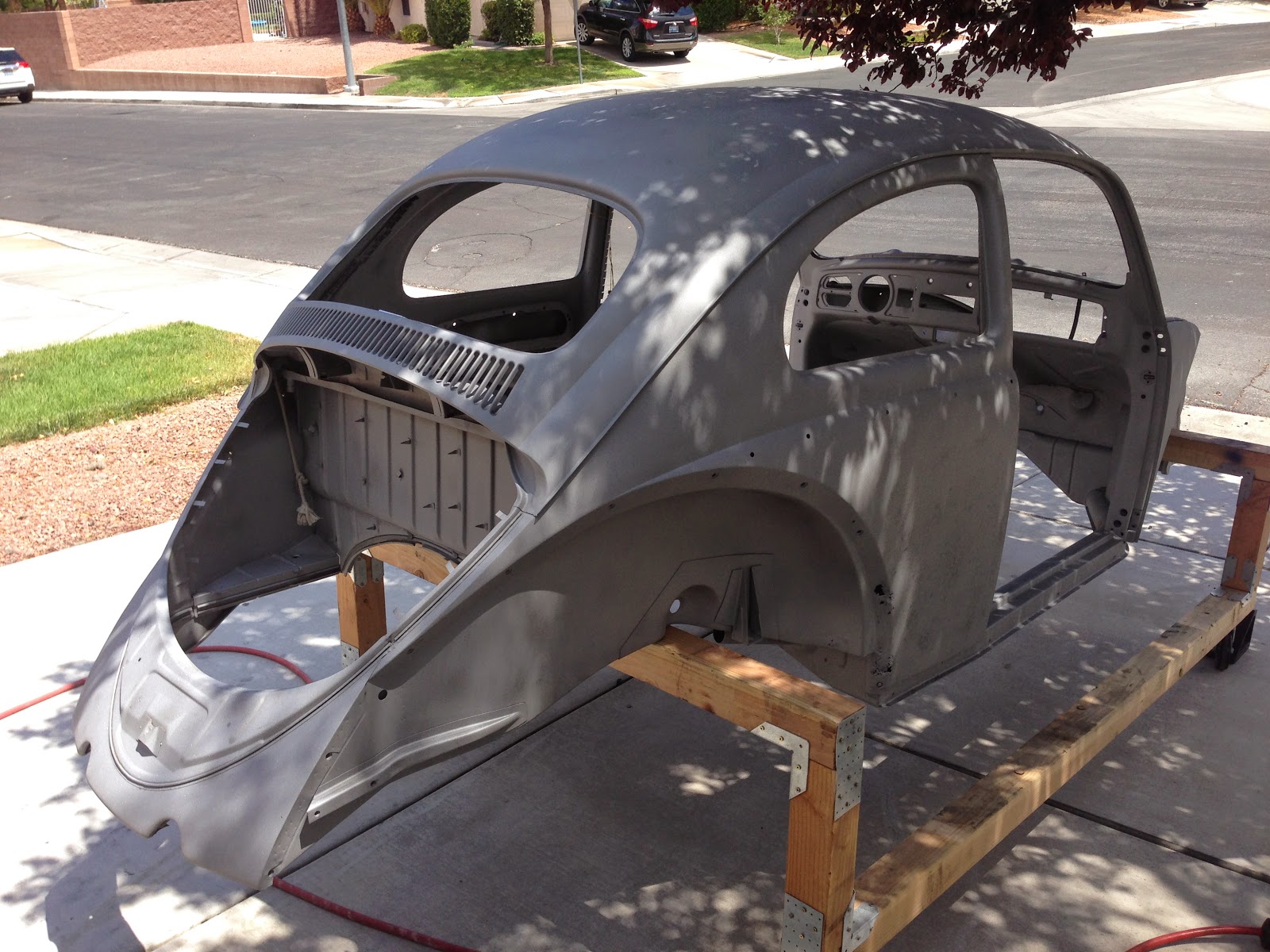 I found some friends in the desert cherry tree in my front yard.  They left their mark on the side walk so I looked up.  With safety goggles of course! 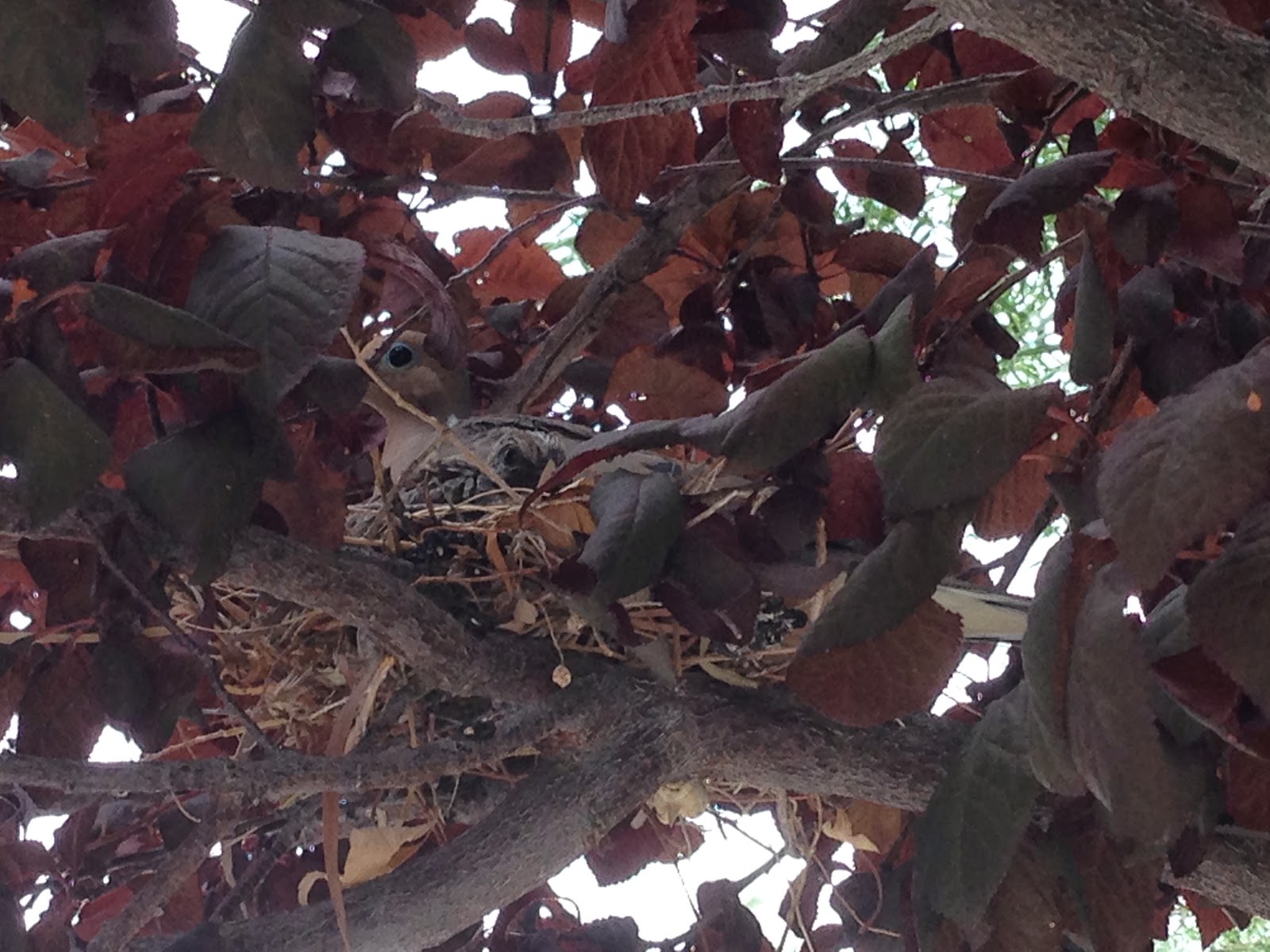 Because we used partial walnut shells on some of the body (in order to prevent warping) I found a product called Hold Tight 102 that washes the metal after to remove any oils from it.  It also serves a rust inhibitor.  It was quite interesting because you actual add it to water and wash the car.  Strange to put water on fresh, clean steel! 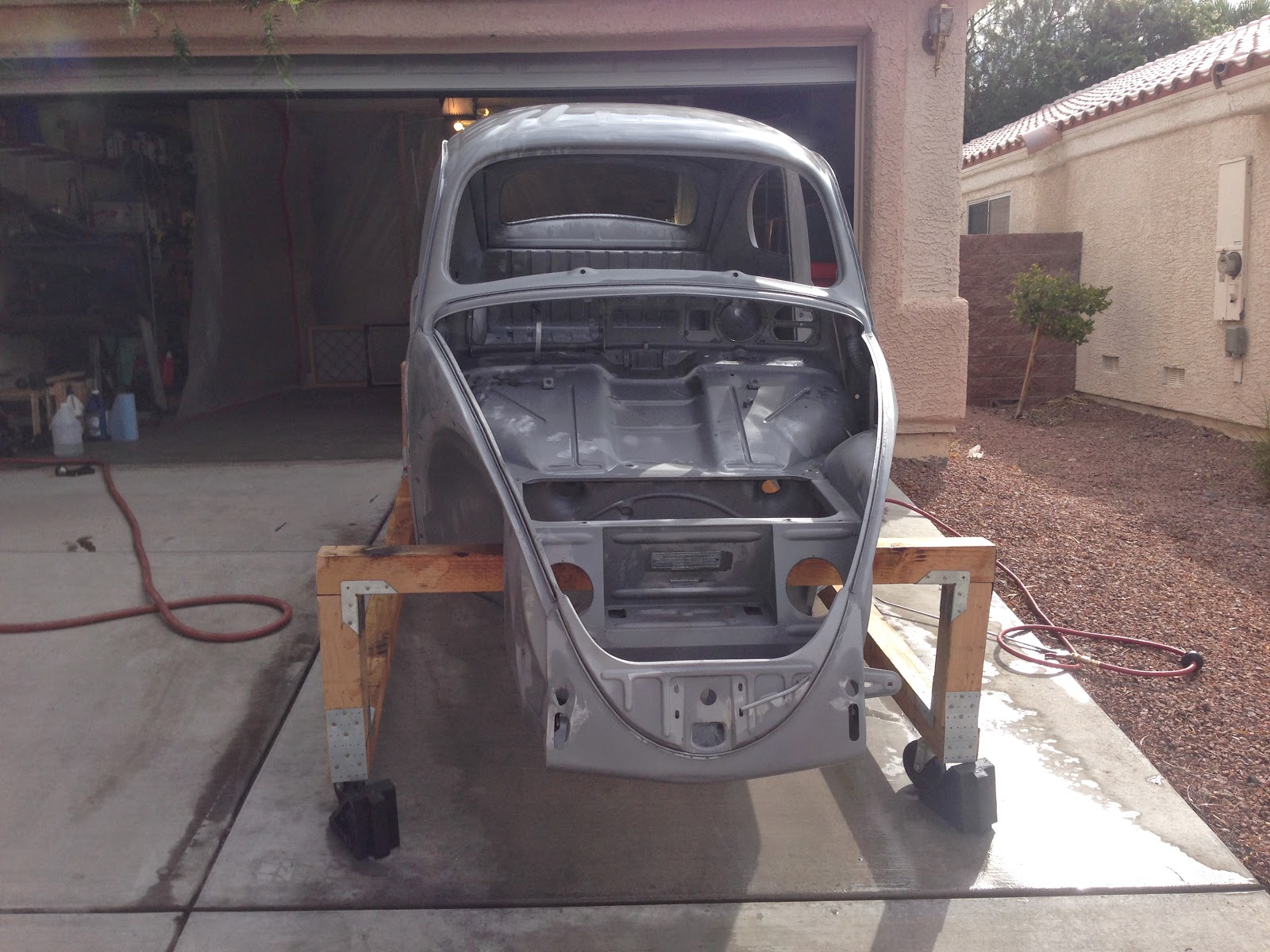 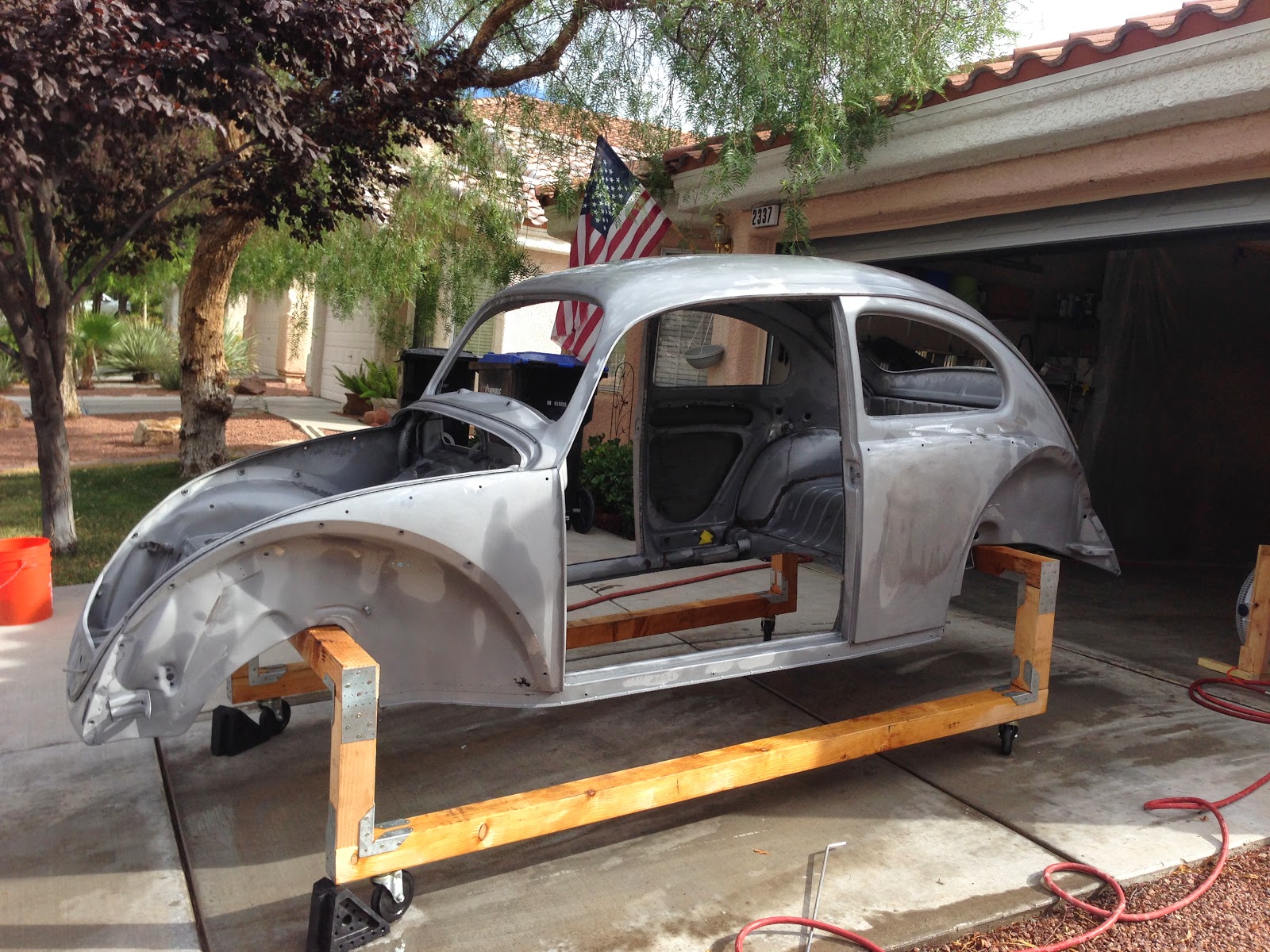 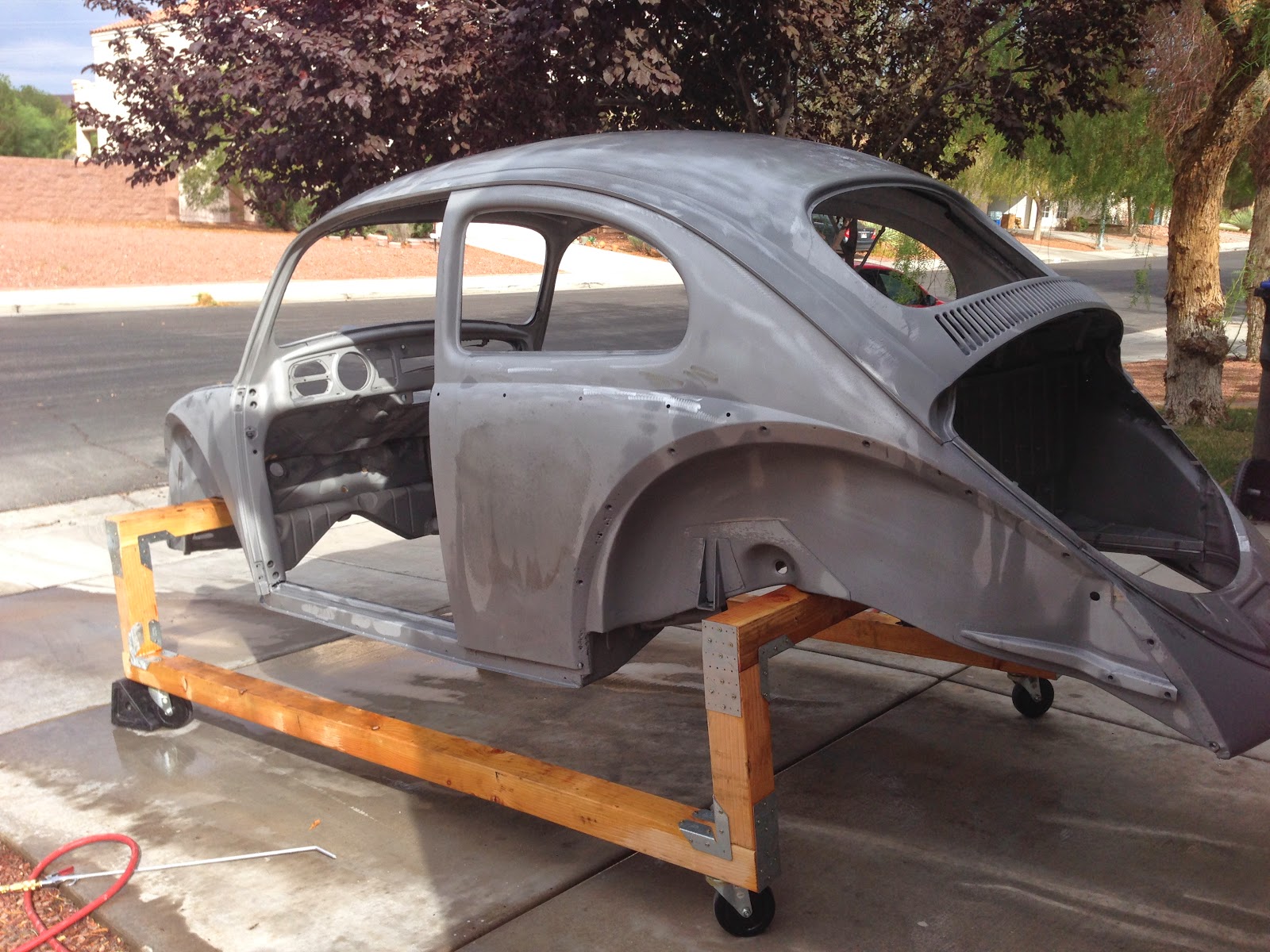 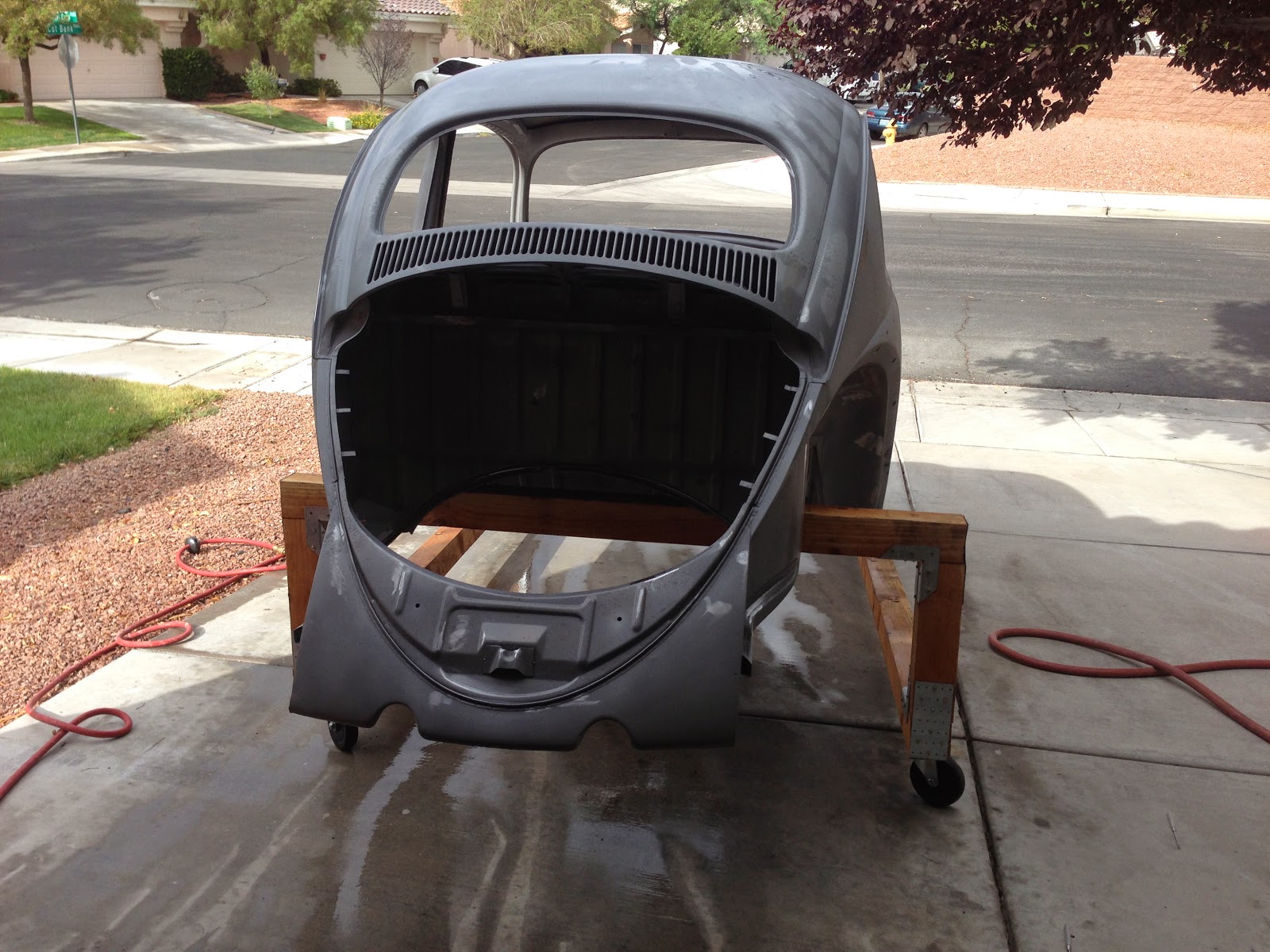 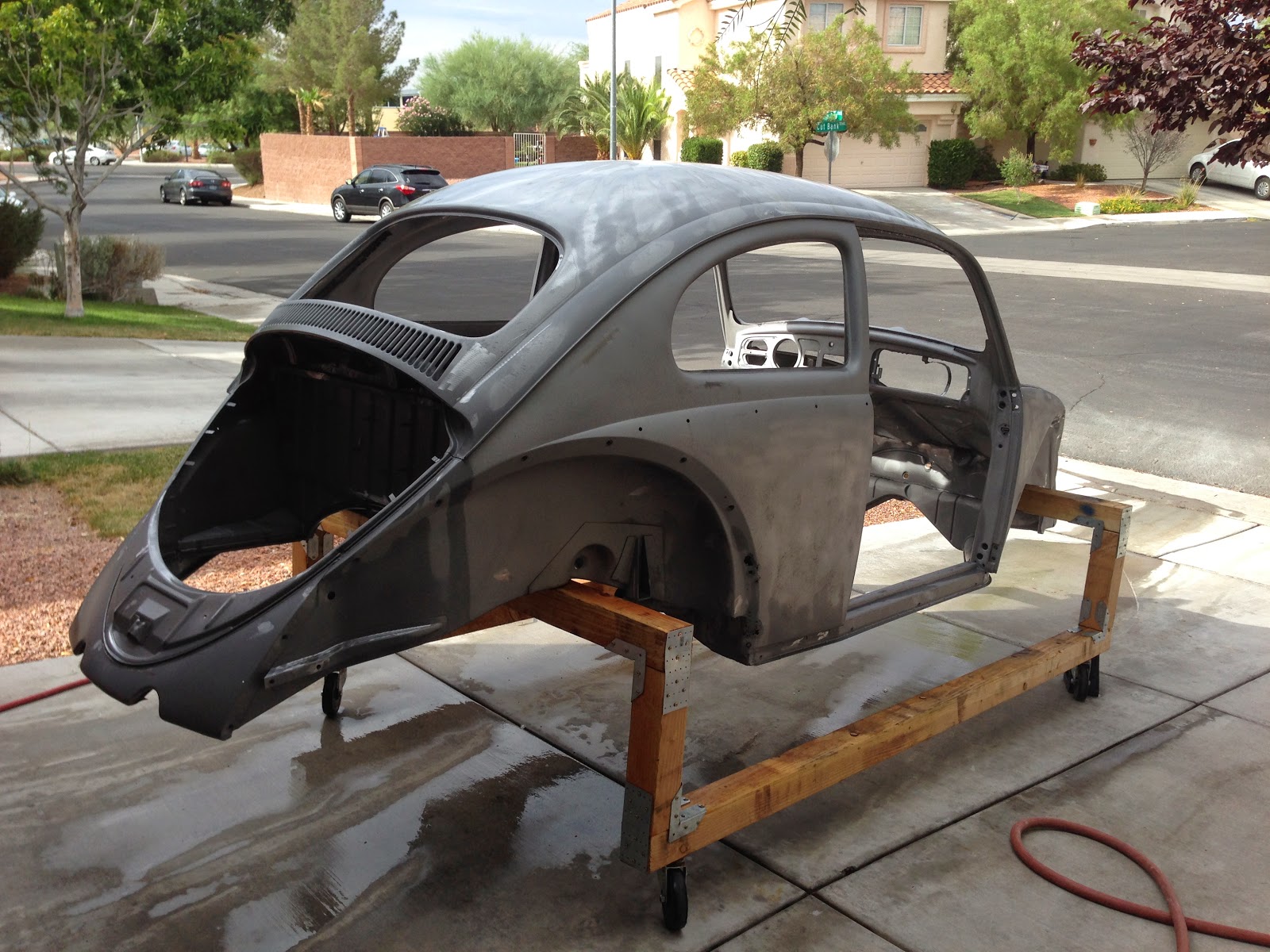 Then I rolled it into the booth and put up the other sides.

Tomorrow I will use wax and grease remover to remove any final dust, lint, oils, etc from the body to have a perfectly clean surface.  Then I'll use a tack rag to get any last remaining pieces.

Finally, I will load up my gun and shoot some epoxy primer to protect the metal from the elements.

I am going to look at finances, but if I'm able I'm going to try and do the remaining pieces as well so that I can paint them all while the booth is up.

Scribbled in by Ryan around 7:50 PM No comments:

Pictures of progress during the really slow past 1.5 months.

This aircleaner is the one that doesn't quite fit my newer engine and I am trying to resell.

The original air cleaner off my 36hp engine.  Waiting for the...rest of the engine :) 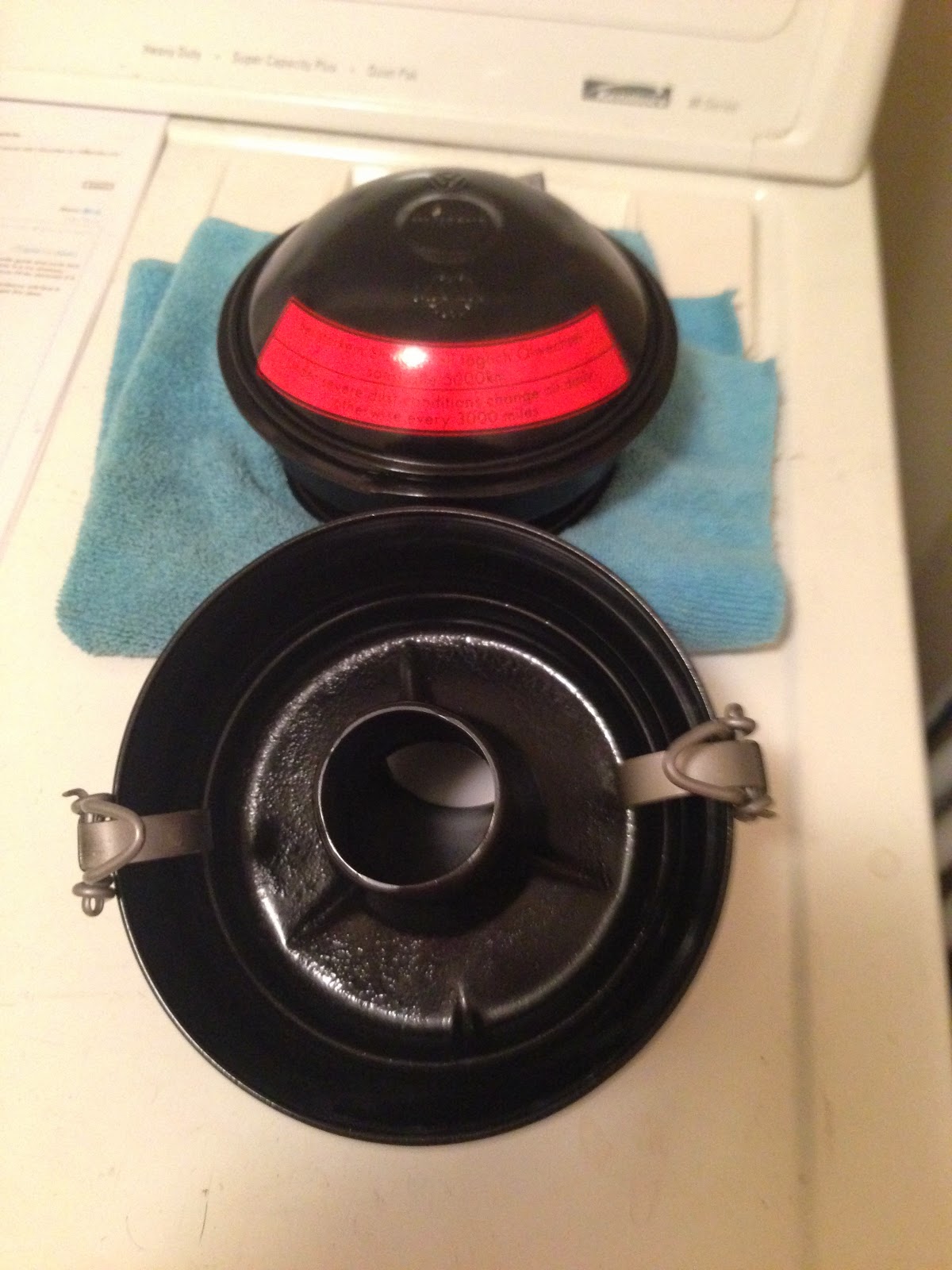 And my restored speedometer!  It came out great.  It took about 3 months total for it all to be sorted out, but glad it is taken care of and ready for more and more miles.  Old picture first, then new. 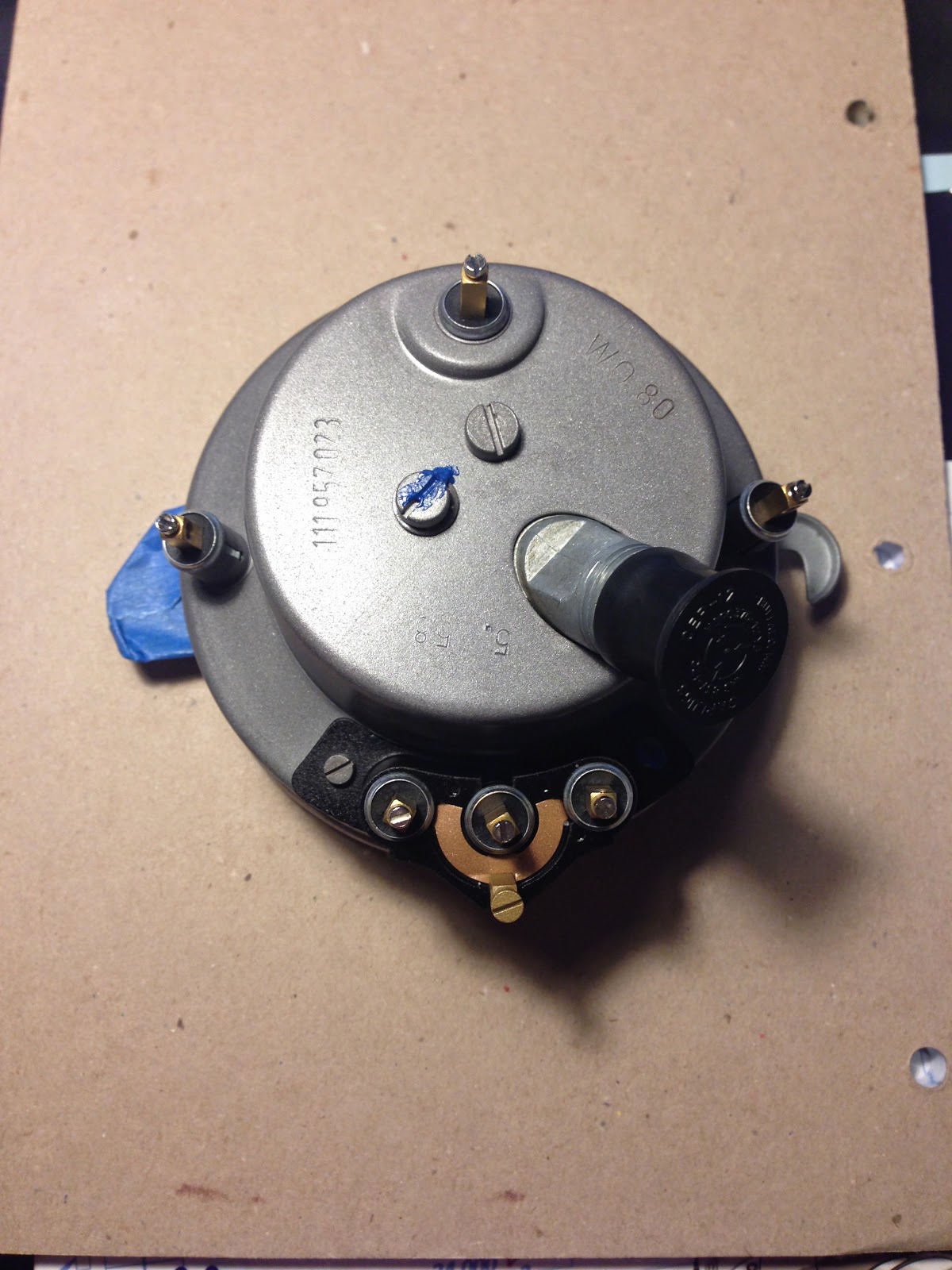 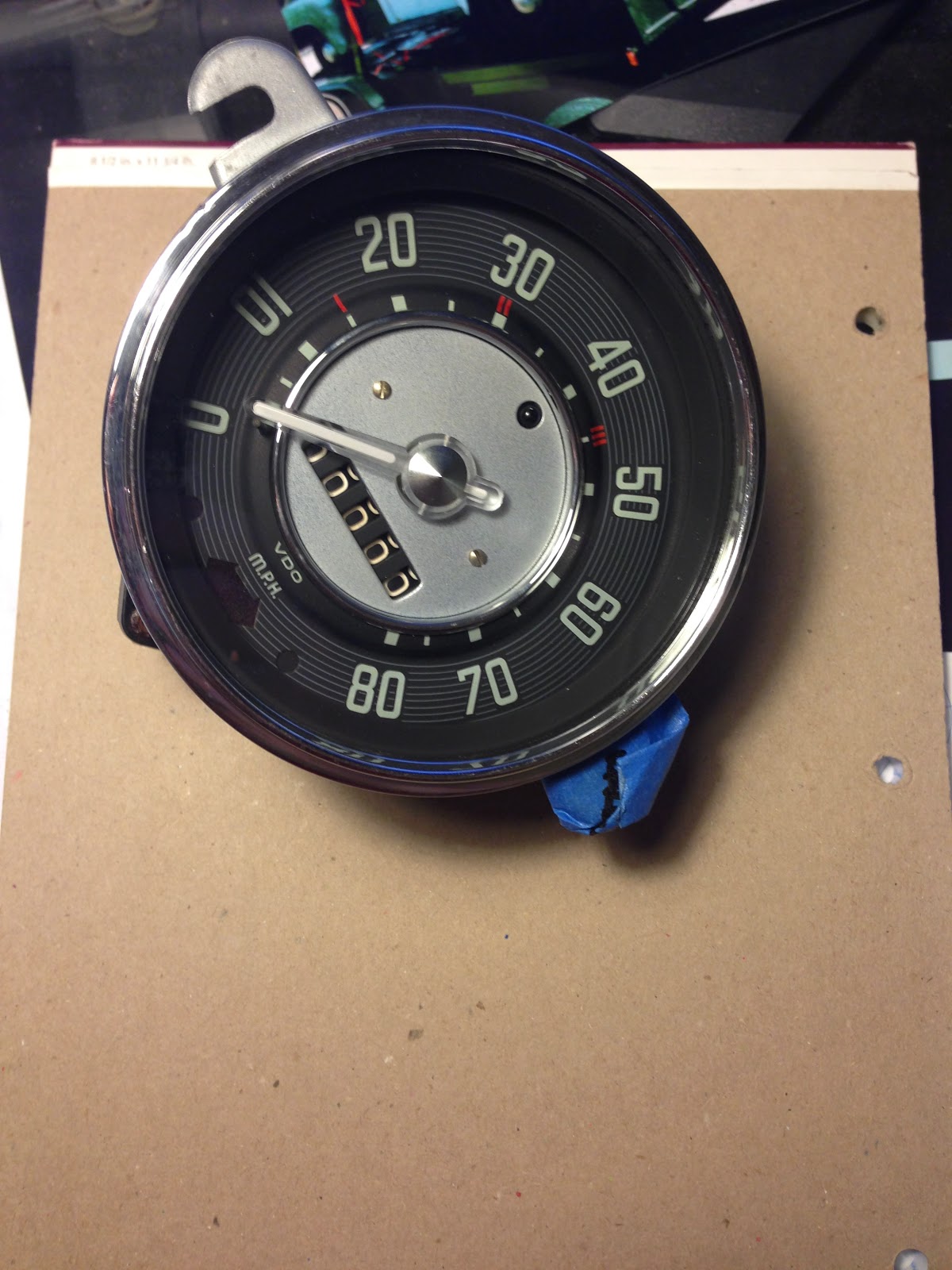 HOPEFULLY, some interesting progress this week...
Scribbled in by Ryan around 8:57 PM No comments:

Well, been over a month since the last update.  I've got the transaxle back on the pan and it drives fine.  Because it kind of screwed up my schedule I've been waiting to get the body media blasted.  Hopefully soon.

I've got all my small bits and pieces organized and the necessary replacements put in their respective baggies.  I also got my speedometer back from restoration, albeit missing a few pieces.  Still trying to deal with the vendor on that.

I've also restored a couple air cleaners.  The original one for my 36hp engine and another 40hp one that I thought would fit my newer engine but doesn't.  Will see if I can find another one to work!

Anyway, kind of a lull in progress here which sucks but should pick up soon.
Scribbled in by Ryan around 11:03 PM No comments: