Well with the holidays around and a busy week last week, I had little progress to show for the bug!

Some things I did get done were buying a parts washer and upgraded it with a few accessories.  I also got a flow-thru brush which is really nice. 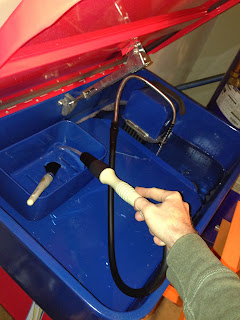 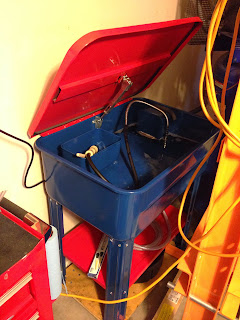 I cleaned all the engine parts, oiled, and bagged them.  They are awaiting a trip to SoCal to the machine shop.  While I was visiting Caroline for Christmas in Palm Springs I had a free day so I drove the hour and a half to go visit the shop.  Reputable place, should be good place to get the things done I can't do locally.

I used all my available resources to clean.

Today, I picked up the taps and other miscellaneous things I need to get the engine case oil galleries opened, tapped, and filled with pipe plugs.  This is an upgrade to better clean the case in the future and also allow for full flow oiling with an oil filter to protect the new investment!
Scribbled in by Ryan around 8:24 PM No comments:

Haven't done much since the tear down.  No pics to share right now.  I did buy a parts cleaner and modified it a bit with some rubber weatherstripping, wheels, and a ball valve to drain in the future.  Next project is to start cleaning up the parts.

Going to be quite a big chunk of change to do the engine, so trying to pay down some debt and see if I can't make some things work.
Scribbled in by Ryan around 3:37 PM No comments:

Well after a relaxing week in Florida for Thanksgiving, I am back to the bug grind.  It's not really a grind I guess, I always end up having fun in the long run.

I did pick up this hood I had been chasing for a few weeks.  Got it shipped via Greyhound.  They were confused and I spent close to an hour there before they looked again and found it in the back.

It is a much better improvement over my hood.  Will need a bit of work, but nothing that can't be fixed.  Best of all, it is an original period correct hood for my car! 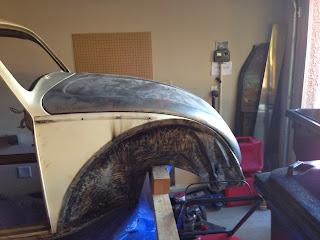 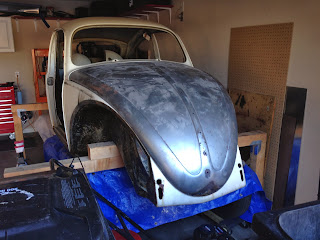 Also got this vise on eBay and mounted it.  Struggled to find the right stainless steel hardware but eventually made it all work. 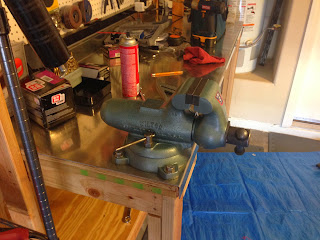 And then started disassembling the engine today, which I finished up.


Scribbled in by Ryan around 7:38 PM No comments:

Put a coat of satin polyurethane on the wood for some additional protection after a subtle tip was given (thanks Shawn!) 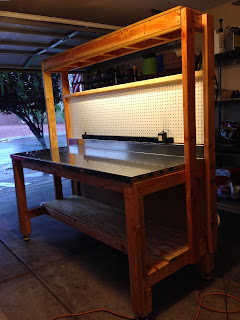 Loaded everything up and this is the nicest it will look. 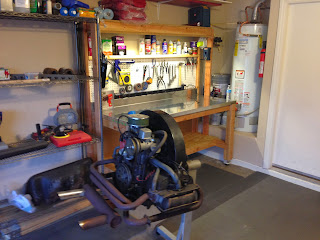 Need to mount the vise and maybe a few little odds and ends, but I'm happy to move on from this project...to the ENGINE!
Scribbled in by Ryan around 3:18 PM No comments:

Over the past week or so I've been slowly assembling the work bench, ordered the metal top, installing accessories and getting everything fitting nicely.  I'm pretty happy with how it turned out.  I just need to put a coat of polyurethane on the wood parts and start hanging tools!  Engine restoration to follow!


The leveling casters and LED lighting make it pretty trick.  I'm happy to have a good work space to start tearing down the engine.  I need to find a good stool to work with but so far so good!

I also won a super cool, restored vintage vise on eBay that will be a great addition to this bench and should last for years to come. 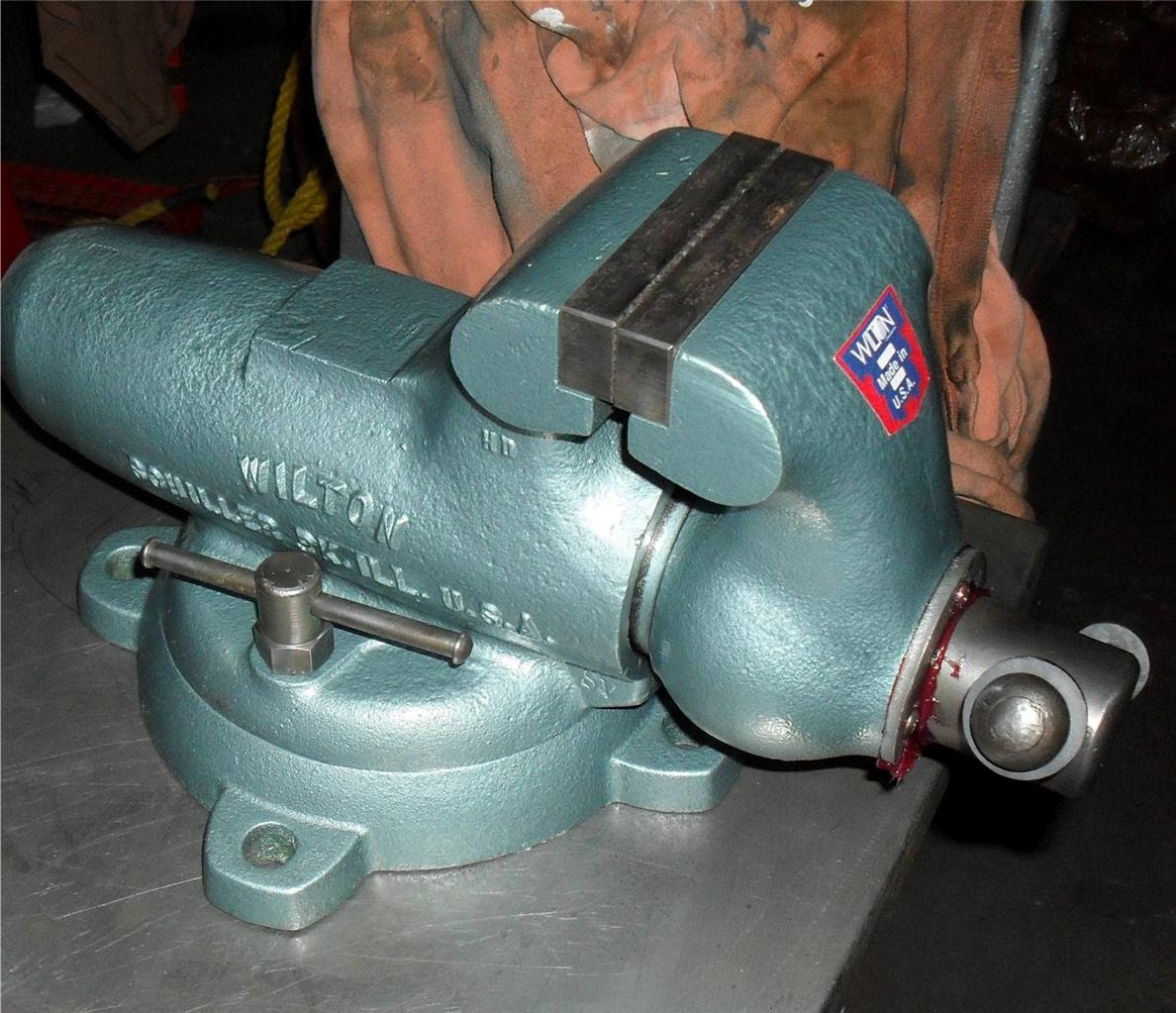 Scribbled in by Ryan around 8:28 PM No comments:

I think I've decided I am going to tear down the engine(s) and in order to do that successfully I need a nice, big place to work.  I decided to build a work bench and got plans.

I am going to use this design, except modified with leveling casters, LED lighting, a metal top, a 12 plug 4ft power strip, and some other things to make it my own. 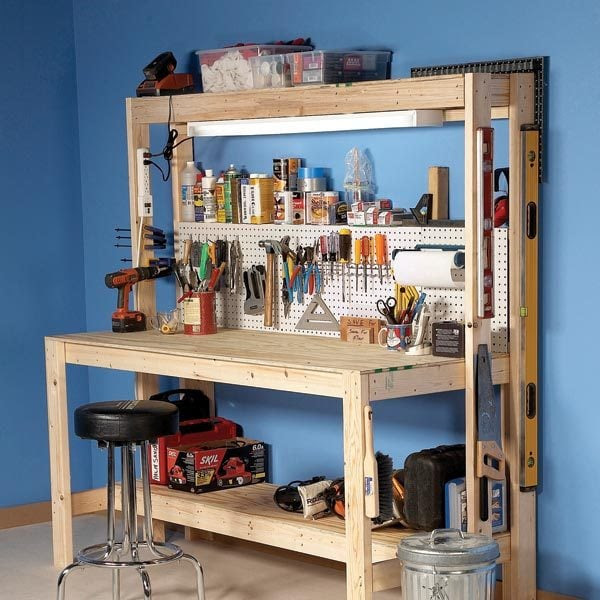 I chose this design (and mods) because it has plenty of storage, a large 6ft by 30 inch work surface, place for lighting and tool organization.

Day one I cut some of the material and assembled the work area.  I had the bigger pieces of particle board and plywood cut at Home Creepo to have a more accurate cut. 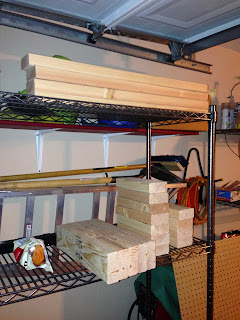 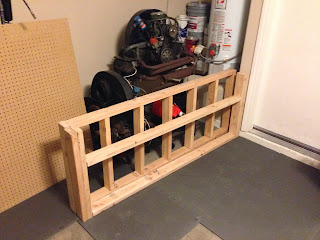 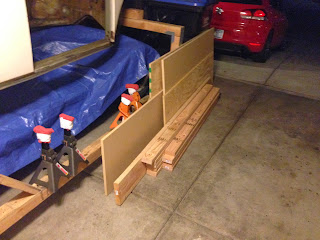 And I assembled some more today. 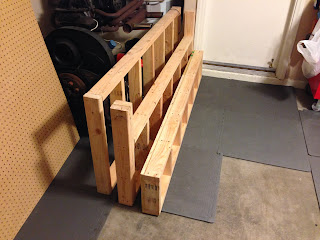 My lights will be here tomorrow and casters on Saturday.  My metal top should be ready Friday.  I ordered it from a local metal supply company and they are bending it to shape for me to create a nice front lip and back splash.  It hasn't been cheap but it has everything I want and will hopefully last a lifetime!
Scribbled in by Ryan around 7:50 PM No comments:

Well, I have removed all the undercoating on the car.  After a few hot molten pieces of that rubber material dropped on my bare skin I was happy to be done with it.

The bug continues to rear it's ugly Florida head and I found some more Swiss cheese today.

I also found the passenger side has been crunched in a bit.  It's hard to tell in these pictures but you can see an additional crease that shouldn't be there.  Will have to look at this further.

And finally, I cleaned the garage with the heavy duty garage floor cleaner, organized shelves, and got everything put back together. 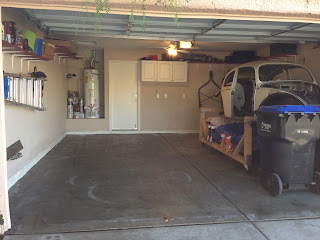 Tomorrow I'm going to get my materials for the work bench.  I am also looking to put a stainless steel or aluminum top on it, which I attempted to do today but showed up too late at the steel place.  Will try again Monday.
Scribbled in by Ryan around 9:36 PM No comments: 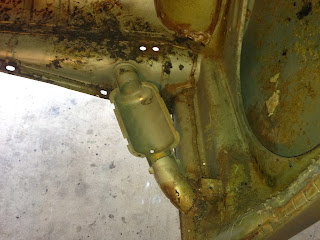 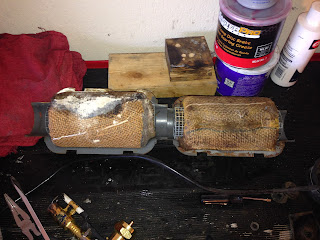 Going to get some spare propane, finish up the undercoating removal and then scrub the garage.  Then I'm going to build my workbench.  I'm slowly leaning towards engine dis-assembly before body work but we'll see.
Scribbled in by Ryan around 3:19 PM No comments:

Well today I finished up the pan, tightening down the rear axle nuts to 217 ft/lbs of torque.  Got to use my fancy torque wrench so I was happy!  Then I filled the transaxle with gear oil so I won't have to worry too much about rolling the car around and running those gears dry.  I kept the oil inside the past few days to make sure it was "warm" so it would flow easily.  It has been chilly over night here so that would have slowed progress a bit.

I also started with the driver's side fenders removing the undercoating.  It took several hours but I believe it came out good enough for media blasting. 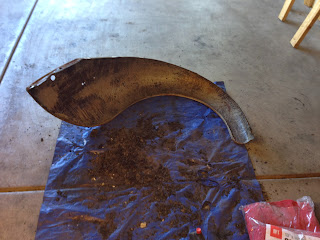 The passenger side ones are the ones I sourced online.  They don't have undercoating which is good for me!

Next, I am going to get started on the body removing undercoating.  Once that is complete, I will deep clean the garage floor.  I'm waiting to do that because as you can see in the above picture, the undercoating is pretty nasty stuff.  Finally, I'll build my workbench!

And figure out where to go from there...body work or engine work!
Scribbled in by Ryan around 2:15 PM No comments: