Day 6 - Separation & Whoever designed tarboard was a masochist!

Houston, we have separation!  My captain Paul and the guy who got me the job with Paul, Ron (plus his first officer Marcus) all helped today getting the body put onto the dolly.  Without them, impossible!

I also got my newer engine put up on the engine stand.  I'll start tearing into that when I don't have things to work on.  I put the newer engine on the stand as I think it will be an easier, cheaper fix, and parts are more readily available.  I'll "learn" on that engine and then spend time on the 36hp original one.

Some grease pen markings I forgot to post yesterday. 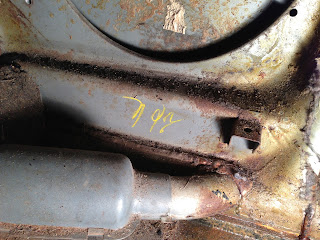 And pictures of the dolly setup. 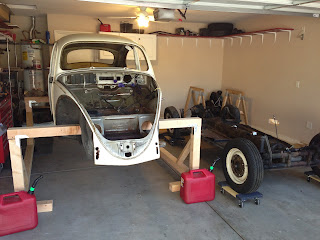 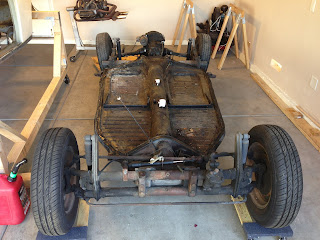 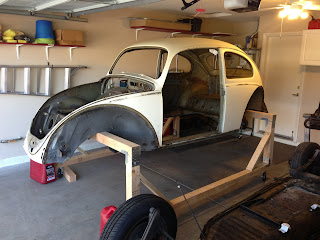 I took the time to scrape off the remaining tarboard on the tunnel and it was a pain.  Not so much the tarboard but the glue really required some scraping.  But it is good enough for the blaster! 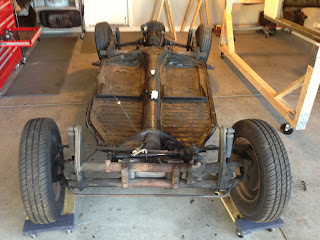 I also identified (highlighted) some of the problem areas. 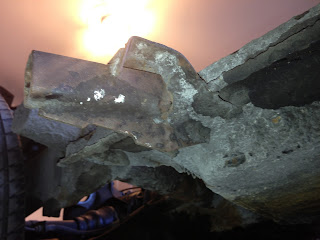 Next will be to remove brake lines.  Turn the pan on its side, remove the undercoating.  Then remove the front suspension.  Transaxle to overhaul and pan to the blaster.  Moving along...

Scribbled in by Ryan around 6:57 PM